The Kharkiv agreements Yanukovych led to the annexation of Crimea – Yatsenyuk 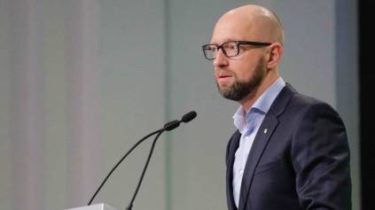 The Kharkiv agreements, signed deprived of the title of President Viktor Yanukovych and leader of the Russian Federation Dmitry Medvedev in 2010, legitimized the presence of Russian forces in Ukraine and give Russia the opportunity to occupy Ukrainian territory.

This was stated by former Prime Minister of Ukraine, leader “popular front” Arseniy Yatsenyuk during a deposition in the case of treason Viktor Yanukovych in Obolon district court of Kyiv.

“The decision on the Kharkov agreements actually legitimized the presence of Russian troops on the territory of Ukraine and made it impossible for the Russian armed forces to carry out the illegal annexation of the Ukrainian sovereign territory. Yanukovych went on to unconstitutionally extend the stay of foreign troops, namely the Russian black sea fleet on the territory of the Ukrainian state until 2042. Including this decision led to the illegal annexation of Ukrainian territory. Under this decision bears the signature of Viktor Yanukovych”, – he said.

“Moreover, starting with his stay on a post of the Prime Minister of Ukraine, domestic and foreign policy of Viktor Yanukovych was intended to implement the foreign policy of the Russian Federation”, – said the politician.

According to the former Prime Minister, for Russia it was extremely important to stop the progress of Ukraine towards NATO membership, despite the fact that it was clearly defined by the legislation of Ukraine. In particular, Yatsenyuk said that after his election as President in 2010, one of the first orders of Yanukovych was the abolition of the Commission for Ukraine’s membership in NATO.

“This was the first decree, which is actually directly contrary to the basics of national security of the Ukrainian state. In addition, Viktor Yanukovych submits to Parliament a bill on amendments to the law of Ukraine on fundamentals of national security, where the withdrawn questions concerning membership in NATO as the ultimate goal of Ukraine is to ensure its own security,” he added.

Separately Yatsenyuk said a key reason for the signing of the Kharkiv agreements: “Their goal was the following – it seems to offer Ukraine a discount on gas that was a pure Chimera, because it is not true, it was not a discount. While Russia has established a non-market gas price for the Ukrainian state”, – summed up the politician.

Recall also Yatsenyuk said in court that life before Yanukovych’s escape was never in danger.

“No information about the threat to the life and health of President Yanukovych was not. This is confirmed by the fact that Yanukovych has personally refused the state protection”, – he said.