The trial of Saakashvili, the first day. The ex-President of Georgia sang the anthem of Ukraine and hugged Tymoshenko 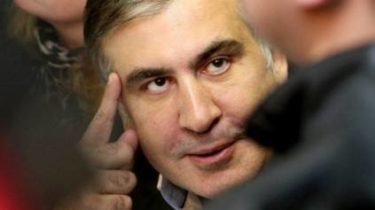 11 November in the Pechersk court of Kiev chose a measure of restraint Michaelu Saakashvili.

From the beginning of the event around the court was chaotic. So, it was not known the exact time of the opening session. Lawyers Saakashvili talked about the 12-hour day, but prosecutors insisted that the trial is due to begin at 11:00.

Journalists began to put to the court in half of the 10th, but later, the police escort brought all of the courtroom and asked him to clear the corridor saying that the meeting should begin only after an hour.

In the end, the judge Larisa Sokol that came in, refused to begin the hearing, since the press and MPs did not react to the appearance of the judge in the courtroom and loudly spoke with Saakashvili. 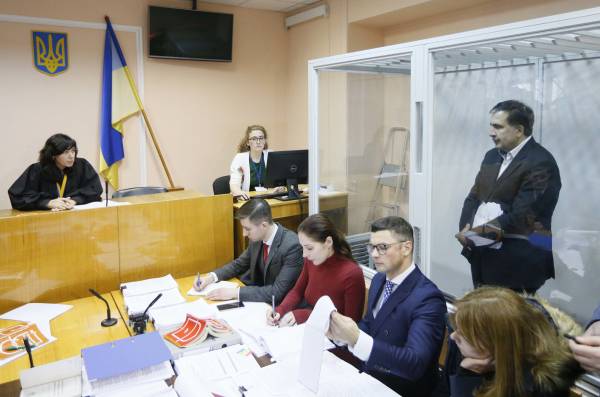 Saakashvili took advantage of the break to give the briefing, during which spoke in three languages – English, Ukrainian and Russian and also sang the national anthems of Ukraine and Georgia.

He also called himself a prisoner of war, prisoner of Russian President Vladimir Putin oligarchy, and focused on what continues hunger strike.

Kurchenko has called Poroshenko and Lutsenko and disown from acquaintance.

At this time , the Pechersk court clashed between supporters of the detained Saakashvili and police officers who would not let them into the courtroom. During a scuffle, someone threw a smoke grenade.

Videoactivity trying to break into the court, which must elect a measure of restraint for Saakashvili

During a break in the courtroom also reigned chaos. Everyone was shouting, cursing, rearranging tables. One table even broke.

After about 20 minutes the judge returned and the meeting finally started. The first thing the lawyers addressed the judge with a petition to Saakashvili released from the so-called cells – are enclosed by transparent walls space, where during the meeting the defendant. Prosecutors did not object, therefore, at the time of the meeting, Saakashvili was allowed to sit next to his lawyers. 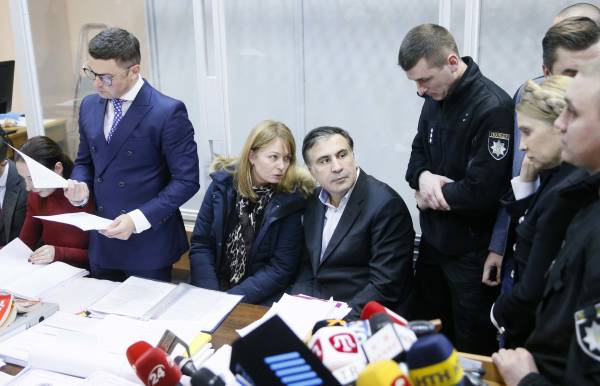 The court found the MPs who wanted to support Saakashvili or even were willing to take him on bail. In particular, in the boardroom came Yulia Tymoshenko. They hugged and spent some time speaking, not paying attention to the judge. 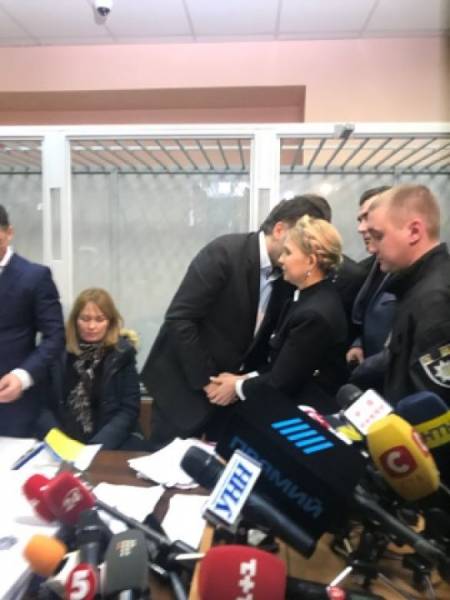 Some time later the judge again adjourned for a ruling on the disqualification of the Prosecutor Alexander Govorushko, which asked the defenders of Saakashvili. The lawyers insist that the case is fabricated, and the suspicion it was announced with violations.

After the break, the judge read the ruling on the refusal to challenge the Prosecutor, and then announced another, “scheduled” break for 15 minutes.

During a break, Tymoshenko’s lawyers gave Saakashvili a document according to which she and other MPs willing to take the policy out on bail. Among the deputies: Alexander Opanasenko, Yuri Derevyanko, Pavel Kostenko, Natalia Novak, kupriy Ivan Krulko, Dmitry Dobrodomov, Alena Shkrum, Igor Lutsenko. Returning after a break, the judge admitted the document to the case. 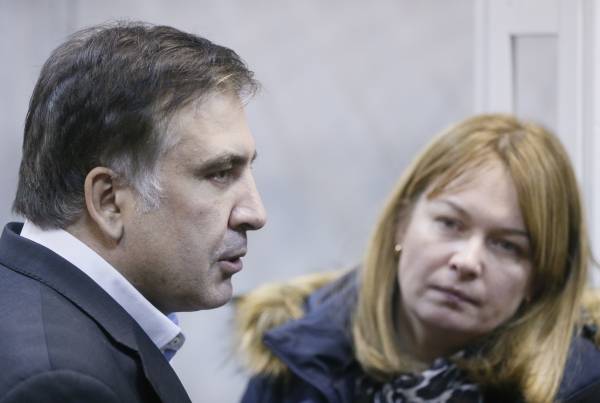 Also, the lawyers filed a new application – on the withdrawal of already group of prosecutors. According to the explanatory notes of the defenders of Saakashvili, the evidence the prosecution had collected illegally. After the break, the judge rejected the defence of the defendant.

The floor was taken by the Prosecutor Alexander Govorushko, justifying the judge of the election of ex-President of Georgia of a measure of restraint in the form of a round-the-clock house arrest.

First, the Prosecutor asked the court to draw attention to the existence of danger to life, Saakashvili and Russian forces. Also, according to prosecutors, only this measure will allow the suspect proceedings in full.

In turn, the lawyers addressed the judge with a request to see the evidence. The judge adjourned the case to prosecutors reviewed the request of the defenders of Saakashvili and formed a response to it.

Around 20:00, the judge announced the decision on election of a preventive measure. She denied the prosecutors the petition about election of a measure of restraint in the form of a round-the-clock house arrest and, accordingly, in the courtroom let Saakashvili to freedom, without conditions.

Recall that Saakashvili is accused of assisting a criminal group under article 256 of the Penal code. He faces from 3 to 5 years behind bars.