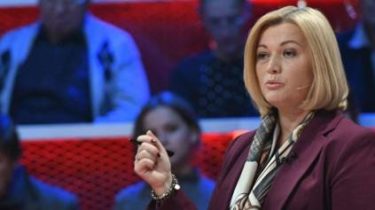 All offices of the American government in Washington, there is a common vision on the necessity of further support of Ukraine in the sphere of security.

This was told first Deputy Chairman of the Verkhovna Rada of Ukraine Irina Gerashchenko, says UKRINFORM.

She noted that the curtailment of Western aid in this direction is not, because “this will affect not only Ukraine, but and security situation in the whole world, because today Ukraine sacrifices the dearest of life of our soldiers, stopping and holding one of the most powerful armies in the world – the Russian Federation”.

At this Gerashchenko has expressed the belief that the contribution to the deterrence of aggression of Russia in Europe are not evaluated until the end.

She noted that the Ukrainian Parliament must also make greater efforts in this direction. Including referred to as on General issues of national security and individual destinations such as the clearance that is provided, including funds from foreign partners.

As reported, the U.S. Senate approved a draft law on “Budget of the United States to 2018 for the needs of national defence”, which contains the resolution on the allocation of $ 350 million. to provide security assistance to Ukraine. The draft law authorizes the granting Ukraine lethal weapons of a defensive character and greatly expands the parameters of support of Ukraine by the United States in security and defense spheres. Thus, the document includes provisions authorizing the use of funds in the US defense budget to rehabilitate in medical institutions of the United States wounded Ukrainian military personnel, education and training to Ukrainian medical professionals in this field, as well as to enhance the ability of air and naval forces of our state.