In Kiev, a kind of action on the Independence Maidan celebrated the day of protection of prostitutes 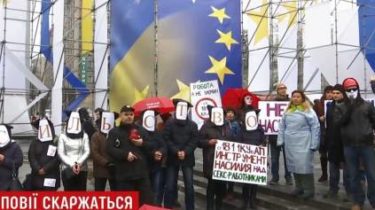 Ukraine joined the international day of protection of sex workers from violence and cruelty. Abroad they take to the main streets with red umbrellas and handing out pamphlets calling with an understanding of their profession and not to offend, says the story TSN.19:30.

In Ukraine, the celebration is now difficult to imagine, because prostitution is not a profession, and crime. At the same time, by estimates of public organisations, this activity think 80 thousand people. So one of the requirements of the action on the Maidan was the decriminalization of prostitution. “There is goodwill from the government. We do not hear, but our services are used,” – said participants of the action with the red umbrellas.

Nastya told reporters that the sex workers earn good money, and don’t mind having to pay taxes to the state. With her words, the services of prostitutes-women are from 300 UAH per hour, and transgender people take 150-200 euros, because they offer surprise and exoticism. Workers in the illegal industry in day of protection of their rights urged customers not to fight and honestly pay for the services. In addition to the customers, prostitutes will also become the object of bullying law enforcement officers who are forced to provide free services.

The prostitute revealed the secrets of the profession: “it has Become fashionable to recruit girls in massage salons”

The police are the complaints refuse to comment, and prosecutors said on the phone that the courtesan about the bad attitude of the cops did not apply to them. But girls are turning to charitable organizations, and often you can find cases when prostitutes become social workers. However, participants of the action were mostly complaining about their colleagues in activities that are embarrassed to come out to defend the law. After all, the performance in the center of Kiev came very sparsely populated.