In Kiev, the barge with sand almost demolished footbridge activist 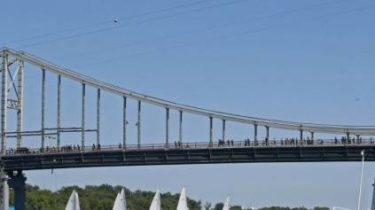 In Kiev, the loaded sand barge rammed the pedestrian bridge at the hem.

About this on his page in Facebook said the activist of “Automaidan” Alexey Gritsenko (the son of the politician Anatoly Gritsenko).

“And you know, the citizens that the day before yesterday we almost lost a pedestrian bridge? The barge, fully loaded with sand, struck a stone embankment around the support. Well, that blow was not very strong,” he wrote.

According to Gritsenko, previously it was found that this barge SOBI.

“People who were at the scene, said that the crew were drunk, but everything seems hushed. The official version is that one asleep and the other was bad…” – said the activist.

Separately, the man said that on November 21, the navigation between the Kiev and Kanev gateway needs to be closed.

And to know the people of Kiev, sho the day before yesterday we almost lost a pedestrian bridge? A barge fully Laden with sand hit the stone…

We will remind, earlier in Kiev the driver demolished a wall and fled the accident sceneleaving the injured passenger. A bump the car was dragged about 30 meters to the nearest pole.