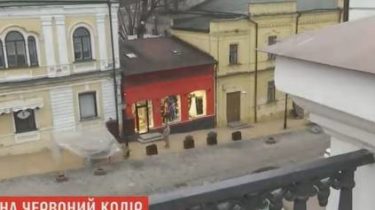 New scandal Andrew. The owners of the house, located directly opposite St. Andrew’s Church, painted it in bright red color. The result has attracted the defenders of the cultural heritage that saw the repair of a threat to heritage.

Andreevsky Spusk is stored local and tourists discreet colours – from yellow to mustard. Until recently, most bright spot here was St. Andrew’s Church. Blue. But now she had a competitor – a small but very well noticeable bright red bench that just jumps out at the viewer from two pastel neighbors.

Black theatre of contention. Everything you need to know about the scandalous building on Andreevsky Spusk

One-storey building visible from afar. But Maria every day looking at it up close, working at a nearby restaurant.

“When they began to paint, I walked in, they started the pink, I say it’s probably the ground, and then it will be yellow? They say no, then that would be even redder,” – says Maria.

The art historian Olga Rutkowski is one of those who are actively fighting against new design of the old house. Says he’s literally surrounded by cultural attractions – the neighboring house lodged Bulgakov, on the contrary masterpiece of Rastrelli and is located in the monument national.

“The whole area of the Andriyivskyy descent with the Castle hill adjoining it is a monument of national importance is a comprehensive attraction,” says Olga.

The city Department of cultural heritage protection updated Andrew’s already seen. However, they say, is powerless. Supposedly, the name of the owner is not found in any register.

“All this is covered by darkness – I can’t work because I can’t trust someone to show. This is wrong, it should not be, but who is the subject, I can not find” – says chief specialist of Department of preservation of cultural heritage KSCA.

Information about the owners of the house at St. Andrew’s, thirty-six, we find in open sources. The land belongs to the company “UNIKOM”. The owner of the company – Landar Alla Petrovna. She owns one of the most inspirational Metropolitan funeral agencies “Peter the Great”.

According to city officials, the house is over a hundred years. Until recently, he was a light-yellow color. In the evening, the journalists of TSN were invited to visit the owner of a clothing store Mikhail. The room he rents.

“Andreevsky Spusk is the middle ages. But the middle ages is characterized by bright colors. We had a question, or we agree, or we quickly give the building in the order that we chose,” says the tenant of the store.

If the officials still find home owners, they will be forced to repaint the facade and to pay a fine. The maximum amount of one thousand seven hundred hryvnia.