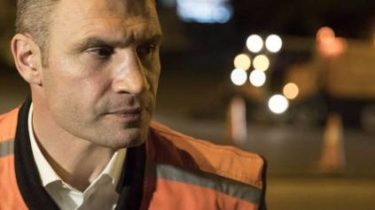 The national Agency for prevention of corruption issued an injunction in violation of the law the mayor of Kiev Vitaly Klitschko concerning officials of the Kyiv city state administration.

“According to the results conducted by the National Agency of the planned inspection in KCSA, a number of violations of the requirements of the law of Ukraine “On prevention of corruption”. In particular, it is not approved within the established deadlines of the anti-corruption program of the Kyiv city state administration, ensuring the ability of any reports of corruption via the official web site of the authority, the decision on the appointment of 2 persons to posts which provide hold a responsible or especially responsible position, without carrying out special inspections”, – stated in the message.

In addition, during the inspection it was found that the KSCA has not reported to NACP on 37 cases of failure to submit and late submission of declarations by civil servants.

As noted, the decision was taken at a meeting of the National Agency.

“The national Agency requires to eliminate the revealed violations, to conduct an internal investigation to identify the causes and conditions that contributed to the Commission by the officials of Kyiv city state administration offences related to corruption, and by its results to take measures in accordance with the law”, – stated in the order.

Earlier, the NACP has made provisions for the leaders of the High Council of justice and the state fiscal service in Kiev. The staff of the national Agency exposed the Odessa and Kiev judge taxman on false Declaration of assets.