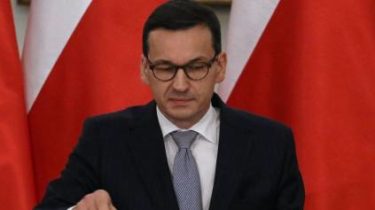 The new Prime Minister of Poland Mateusz Morawiecki said that his government would seek to strengthen relations with its Eastern partners, particularly Ukraine.

Speaking in the Sejm with its action, Morawiecki said that he wanted to return to the true strategic partnership, UKRINFORM reports.

Videopremiere-Minister of Poland, resigned amid criticism over the deterioration of relations with Ukraine

“We want to return to the present strategic partnership in the East. We plan to deepen our relations with Ukraine, Lithuania or Georgia and give them a new quality,” said Morawiecki.

Polish Prime Minister also noted that Poland will continue to unite the countries of the region, in particular in the framework of the “Visegrad group” and the project of Three seas (Adriatic, Baltic, Black sea).

“Ukraine needs Poland, and that without Ukraine it will cost” – Polish foreign Minister

We will remind, the new Prime Minister of Poland Mateusz Morawiecki on the first day of the candidacy for the post of head of the Cabinet of Ministers said that relations with Ukraine should be built on historical truth, and such events as “genocide in Volhynia” should not be forgotten. He also added that the country accepts refugees from Ukraine than it helps to decongest the Eastern flank of Europe.