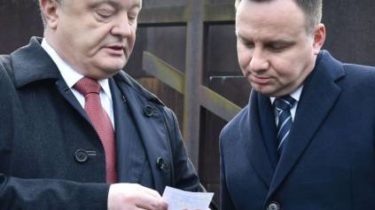 Poland supports the input of all the occupied part of Donbas peacekeeping mission of the United Nations and will support this issue at the UN security Council.

This was stated by the President of Poland Andrzej Duda during a visit to Ukraine.

“A very important idea that need to spend to the occupied territories of Donetsk and Luhansk regions could begin peace mission of the UN, the so-called “blue helmets”. We strong believe that it was a peacekeeping mission on all standards for this kind of operation,” said Duda.

Over the next two years Poland will be a non-permanent member of the UN security Council.

Duda emphasized the question of reference of the mission, “that it was not solely limited to the protection of the OSCE representatives, and it was a real peacekeeping mission, which will operate throughout this area and that really would have led to a conflict that arose as a result of Russian aggression, could be completed and the Minsk agreements have been implemented”.

The Polish President assured that his country will support the introduction of the UN peacekeeping mission during the voting in the security Council.

“Poland is one of the States that this initiative will support. We are supporters of such a solution, and here Ukraine can count on our strong support,” – said Duda.

“As agreed”. Poroshenko said the military “a strong signal of support” from the US and Canada

The President of Ukraine Petro Poroshenko, in turn, noted that along with a Tune they said details the coordination of joint actions, including in support of joint initiatives for the introduction of peacekeepers.

“Solid voice of Poland in the UN security Council plays an important role in the discussion on ensuring the return of peace in the East of Ukraine and in Crimea and to ensure the liberation of the occupied Russian Federation territory,” said Poroshenko.

Ukraine also maintained that UN peacekeepers were present in all areas of the occupied Donbass, and not only on the line of contact, as Russia wants.

“The format of peacekeepers in the Donbass should be the format of the peacekeeping mission. No security of observers of the OSCE SMM. Area of responsibility – all the occupied territories in the East of Ukraine. No line of contact… Every day, including the last 24 hours, we are losing Ukrainian heroes”, – stated the President of Ukraine.

Videomonitoringa mission and historical issues: what was said by the presidents of Ukraine and Poland in Kharkiv

Meanwhile US President Donald trump signed a defense law, which Ukraine has 350 mn USD of military aid. And Canada made Ukraine to the list of countries authorized to supply automatic weapons.