In this year’s last issue of “Right to Vlad,” policy openly talked about their income 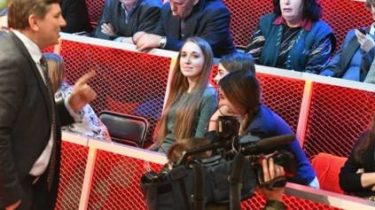 Which lottery was played by Oleg Lyashko to win his inexplicable condition, and if he buys himself a Ukrainian, as that encourages others to do? On this and many other spoke at this year’s last edition of political talk show “Right on Vlad”, says the story TSN.19.30.

At the end of the year leading decided to ask the politicians who supported the values and requirements of the revolution of Dignity, that they just happened. The name of the program was a rhetorical question the speaker Parubiy last week when the ruling coalition in the Parliament a United front with the opposition bloc went on the offensive in fighters.

“They did everything wrong, and only then began to understand what happened to us? I really do not like these pretentious and false things really are,” says host of the talk show Natalia Moseychuk.

The head of the presidential faction of Artur Gerasimov these doubts do not bother and prefer to advertise the successes of the government. However, it neither agreed political opponents or spectators.

“Today we have restored the army, restored the defense industry, cleaned up the banking system, restoring the economy! You see, roads don’t you see?” – spoke on “the Right to Vlad,” Gerasimov.

But the leader of the radical Oleg Lyashko, even outright accusations just smiled. Few believe in the mysterious lottery winnings, which he has declared, but apparently he doesn’t care.

“Thank you for watching my winnings, you also want in life is just luck,” said he.

Faction of Lyashko actively lobbying for the law “Buy Ukrainian” which in the opinion of the Ministry of economy, destroy ProZorro and will lead to the restoration of Terry to corruption in public procurement. However, to prove that he only buys Ukrainian radical could not.

What kind of watch was on it, viewers are wondering still. However, in its Declaration Lyashko near the pitchfork entered shveicarskie four hours worth at least 200 thousand hryvnia. The ability of politicians to prevaricate and play like in the theatre was the hardest discovery for the leading current-show.

“It amazes me the level of cynicism that people for the sake of ratings, for the sake of popularity is able to lie and lie as they breathe” – says a leading “Right to Vlad,” Sergei Ivanov.

After the break, talk show is waiting for the new season. “The right to Vlad” will return in late January.