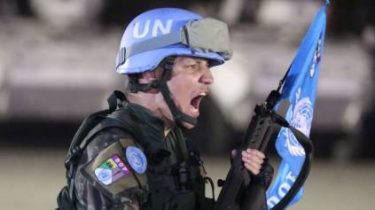 After completion at the end of December a two-year mandate, a temporary member of the UN Security Council, Ukraine will continue to actively promote the initiative to the introduction of the UN peacekeeping mission in the Donbas.

This was stated by Minister of foreign Affairs of Ukraine Pavlo Klimkin during a press briefing at the headquarters of the United Nations, writes UKRINFORM.

Ukraine now has absolutely a similar position with the United States, the countries of the Normandy format – Germany, France, who represent the European Union. They say, “we should push Russia further in terms of sanctions, solidarity, additional tools.”

Klimkin already met with many members of the Security Council who were aware of the current situation and about the intentions of the Russian Federation “to establish Russian protectorate in the occupied Donbas.” In addition, the Minister noted that the Russians are trying to create the impression that the UN mission will be something like “occupation administration”.

“My answer is this: the occupation administration already exists there. We need a real mission, which will cover the entire territory of the occupied Donbass, uncontrolled section of the Ukrainian-Russian state border, besides, of course, will have the strongest mandate on disarmament, deterrence, the real withdrawal of troops, including Russian forces and all kinds of weapons, and, of course, to prepare for the upcoming Donbas elections”, – said the Minister.

According to him, the formula is very simple: Russia is an international force going in.

“But the problem is only in Russia that wants to leave the situation as it is and continue to use the Donbass – which she did not care – as a tool to further destabilization of Ukraine and Europe”, – said the Minister.

The Minister of foreign Affairs of Ukraine stressed that the alternative for the UN peacekeeping mission in the Donbas can only be a freezing of the situation on the Russian conditions.

“And it will be a time bomb – not only for us, for Ukraine, but for all”, – stressed the head of Ukrainian foreign Ministry.