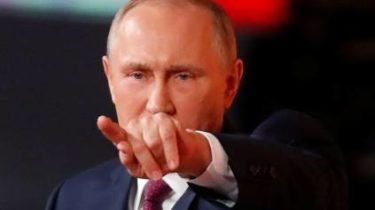 Russian President Vladimir Putin said that in the Donbass no Russian army, but formed police units for protection of the population from the nationalist battalions.

He said this in response to the question of the journalist of the UNIAN Roman Tsimbalyuk during the annual press conference.

“You said that no secret that is sent to the Donbass people solve military issues. In life, it is called to kill citizens of Ukraine. Here everything is clear, our army knows what to do with these people, with your competitors, “reshalami”, some of them are then taken prisoner in a Ukrainian prison, and sentenced them to life imprisonment. You’re running a third term, suddenly you don’t choose if you want to change its citizens? Moreover, it is not so difficult, because the Ukrainians don’t throw, and we want to return my 65 hostages, which you know is not only Sentsov and Sushchenko, tens Crimean Tatars. If you win the election, you will continue to take the same absurd position on Donbas, relative to the peacekeepers? And practice your people that solve there issues, they engaged in a massacre of the population of Donbass. You do not need to fear, because the liberated Ukrainian city of Slavyansk and Mariupol live a lovely peaceful life”, – said M. Tsymbalyuk.

“My heart bleeds”. Putin decided to speak about the situation.

“The Russian army on the territory of Donbass no, but it created certain military police units that are self sufficient and ready to repel any large-scale military action against the Donbass. This corresponds to the interests of the people who live there. Because if they have no such opportunity, that a massacre, which you said will be implemented by the nationalist battalions,” he retorted Putin.

According to him, what is happening in the Donbas is a tragedy, but to blame the Ukrainian government.

“The source – a coup, an armed unconstitutional seizure of power. Part of Ukraine disagreed, beginning to deal with it, with the dissenters, using intelligence, and then full-scale use of the armed forces,” – said the Russian President.

Separately, Putin commented on the implementation of the Minsk agreements.

“The effectiveness of the Minsk format, of course, low. In my opinion, primarily due to the unconstructive position of the representatives of the current authorities in Kiev. No desire to implement Minsk agreements. No desire to start a real political process, the completion of which can be implementation of the agreement on the special status of Donbas, which is stipulated in the corresponding law adopted by the Parliament. But newagey still under various pretexts in force. The parameters of this law are well known. The US are essentially full-fledged and rightful participants in the settlement process, regardless of whether they are party to the Normandy format. They are deeply involved and aware of all the events that happen,” he concluded.

Note also Putin accused Ukraine of delaying the exchange of hostages. According to him, the Ukrainian side at the last moment refused to exchange hostages with IDLO on your list.