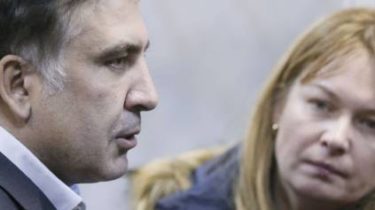 The Ministry of foreign Affairs of Ukraine does not participate in any negotiations regarding the extradition of the ex-Chairman of the Odessa regional state administration of Mikheil Saakashvili.

Putin – Navalny: These “Saakashvili” will destabilize the situation in Russia

We will remind, the Georgian media reported that in Belarus the head of state security of Georgia Vakhtang gomelauri holds secret talks with Ukrainian officials on the extradition of the former President of Georgia Mikheil Saakashvili from Ukraine.

In early December the General Prosecutor’s office and security Service of Ukraine in the morning came to search in a rented Kiev apartment Mikheil Saakashvili to the Church. The reason for this unexpected visit became the criminal proceedings opened GPU for 256 the Criminal code (assistance to participants of the criminal organizations and concealment of their criminal activity).

“My heart bleeds”. Putin decided to speak about the situation.

Publicly the charges against Saakashvili announced the head of GPU, Yury Lutsenko. According to him, the autumn protests, Saakashvili and his supporters was organized to seize power in the country. Their sponsor was approached to Victor Yanukovych the oligarch-fugitive Serhiy Kurchenko. He allegedly handed over half a million dollars ally Saakashvili Severiano Dangadze. Latest security forces detained while trying to leave Ukraine with a portion of the amounts received from the courier Kurchenko. Now Dangadze arrested for two months.

The Prosecutor General’s office suspects Saakashvili in a coup.

Police detained Saakashvili late on the evening of 8 December and taken to the detention facility of the SBU in the Askold lane. However, the evening of 11 December the Pechersky regional court of Kiev released Saakashvili unconditionally. The court denied the prosecutors the petition about election of a measure of restraint in the form of a round-the-clock house arrest.