Turchynov: on the orders of the Kremlin, Russia may at any time to start large-scale fighting 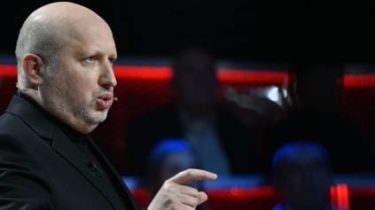 RF creates a powerful military infrastructure along the border with Ukraine and to start large-scale military actions against Ukraine on orders from the Kremlin at any moment.

This was stated by Secretary of national security Council and defense of Ukraine Oleksandr Turchynov, the press service of the NSDC.

“Moreover, Putin’s decision will depend on the actions Ukraine. On the contrary, a much more important factor for the formation of foreign policy and military adventures of the Russian Federation is the development of the political situation in Russia”, – said Turchinov.

Secretary of the NSDC of Ukraine called the revanchist policy of the Russian Federation aimed at restoring its regional and partly global domination, “the major factor in the destabilization of the security situation in the East of Europe and on the continent as a whole.”

We will remind, the Ministry of education of Krasnoyarsk Krai, in the Russian Federation, recommended that regional educational institutions to switch to war-time conditions. “Please convey to the heads of the departments of education and methodical recommendations on organization of educational process during cast of subordinate institutions in willingness to work during mobilization, wartime, in the case of the introduction of martial law”, – stated in the order.

Before that, Vladimir Putin urged all large and strategic enterprises of Russia to prepare for the increased military production. According to him, the ability of the economy to a rapid increase in production of military products and services is “one of the most important conditions for ensuring military security of Russia. And this should be ready just all strategic and large enterprises, irrespective of patterns of ownership”.

According to him, during the bloody war in the Donbas killed more than 10 300 people, including more than 2,500 civil and more than 200 children.