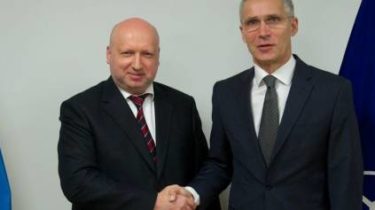 Ukraine seeks to join NATO, and currently holds the relevant security sector reform and defense to meet the standards of the Alliance, and plans to join the Program extended features.

This was discussed during a meeting of the Secretary of the NSDC of Ukraine Oleksandr Turchynov with NATO Secretary General Jens Stoltenberg at the headquarters of NATO in Brussels.

During the negotiations the parties discussed the questions of counteraction to the Russian aggression in Donbas and hybrid threats that now facing Ukraine.

Turchynov recalled that over the past three years the army of Ukraine became a new, able to protect the country.

“Given the challenges currently facing the state, a significant portion of the budget is directed to defense and security of Ukraine. Total expenditure on security and defense in 2017 exceeded 5% of GDP,” said Secretary of national security Council and added that such figure is included in the state budget for 2018.

U.S. Ambassador to NATO assured that the Ukrainian question was at the top of the task list

Note that a month ago, November 17, at the International security forum in Halifax (Canada) Stoltenberg noted that NATO’s doors are open for Ukraine and Georgia. Turchynov thanked him for this statement and said that Ukraine to advance on the way to the Alliance “focused on reform, modernization of the security sector and defence, the fight against corruption and strengthening democratic institutions.”

A new important stage of cooperation between Ukraine and NATO may be joining the Program extended features.

“According to the conclusions of the military experts of the partner countries, Ukraine meets all the criteria that must be met by a potential participant of the Program”, – said Turchinov.

In July 2018 scheduled meeting of the Commission Ukraine-NATO at the level of heads of state and government during the NATO summit in Brussels.

“In addition, we are interested in developing practical cooperation with NATO, in particular, in the issues of military-technical cooperation, strengthening the protection and security of military arsenals in Ukraine, cyber defence,” – said Turchinov.

NATO Secretary General stressed that Ukraine is important to Europe’s security as a whole.

“Member countries are ready to continue to assist your country in the way of its civilizational choice”, – said Stoltenberg.