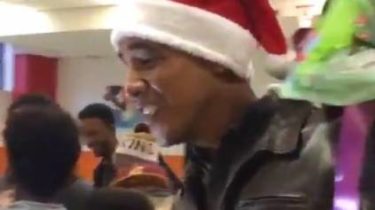 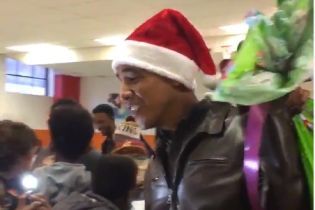 Former US President Barack Obama surprised children in Washington, suddenly visiting the local Club of boys and girls with gifts.

“There’s no better time than the holiday season to reach out and give back to our communities,” former President Barack Obama tweeted about his recent visit to a Boys & Girls Club in Washington, D.C. https://t.co/sJGSqnlFho pic.twitter.com/V18vkgi1DQ

Obama in leather jacket and hat of Santa Claus with huge sack full of gifts on the shoulder, entered the room, where there were about 50 children. Seeing the former President, they surrounded him, began to congratulate and shake hands.

Obama later published on Twitter a photograph of children from the Club boys and girls and wrote that it was a great start to the Christmas holidays.

There’s no better time than the holiday season to reach out and give back to our communities. Great to hear from young people at the Boys & Girls Club in DC today. pic.twitter.com/FSJkj1qwg9

Barack Obama, a Chicago native, decided to stay in Washington after eight years in the White house. He and former first lady Michelle Obama bought a house in the Kalorama district, where their younger daughter, Sasha, finishes high school. Their eldest daughter Malia is a freshman at Harvard University.

After leaving the White house, Obama did not stop to engage in social activities. He and his wife Michelle often come to local children in schools and youth organizations in Washington. They also founded the Foundation for Obama, stating that its mission is “to inspire and empower people to change the world.”