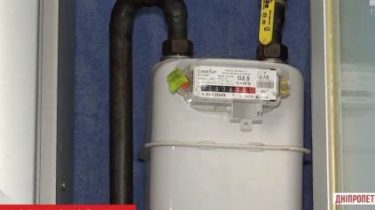 The inhabitants of the town of Zelenodol’sk of Dnipropetrovsk region won a lawsuit against the regional gas companies. The people appealed against the bills that began to come after the installation of common parts, says the story TSN.19:30.

“As a pensioner can pay 21 cube? How can he spend it,” asks the resident of Zelenodolsk Lyudmila Gurina. She says that her payments had increased ten times, and it was a shock for the woman who lives on the 1.5 th retirement. The reason was the meter, the readings of which are shared between all the apartments, and if one person saves, and her neighbors are constantly concocting and bask pay all equally. If someone has an individual apartment meter, its performance shall be deducted from the total and then what was left, divided on all others.

Lyudmila Gurina says its neighbors with its own counter with the whole family consume much less – 6 cubes against assessed 16. Help residents appealed to local MPs and activists. “I went to a chain reaction across the city left more than 5 million downloads of local residents,” – said the Deputy of city Council Dmitry Sad. In the victory over monopoly, few believed, but it is produced legally and has passed to the court. After a year of red tape, the company still lost the court – ordered gas companies to install individual meters.

New utility rules: the Ukrainians do not understand, why give up the meters on the house

“Dnepropetrovskgaz” I assure you that everything was done according to the legislation, because until January 1, 2018 have to put all on the account, therefore, sought to find a cheaper and quick solution to this problem. “The law does not stipulate the equipment obsidianovye or individual. In order to have time, the national Commission decided that it was more appropriate to set the house”, – has explained a press-the Secretary of the company Eugene Lapko. Gas suppliers have after losing, decided to appeal.