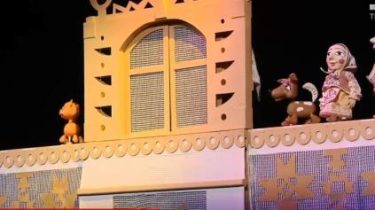 During the charity performance organized by Marina Poroshenko on the day of St. Nicholas, in the puppet theater the lights went out. At first, the spectators perceived the trip as special effects, but then the organizers said that it was an accident, so the actors asked the cameramen to illuminate the scene, says the story TSN.19:30.

The story of the cold Morozenko continued in the light of the cameras. There were two hundred kids from the Kiev region – children with disabilities, the families of the volunteers and the displaced children. The impression of the show emergency the special effects they didn’t. “On the contrary, the children loved it” – said one of the moms.

In Kiev opened the first official residence of St. Nicholas

As reported, the family of the President of Ukraine Petro Poroshenko has allocated 3 million UAH of own funds on the organization of the architectural competition for the Museum of the revolution of Dignity. The jury of this competition for the best international and domestic architects also take into account the opinion of relatives of the fallen heroes “Heavenly hundreds”.