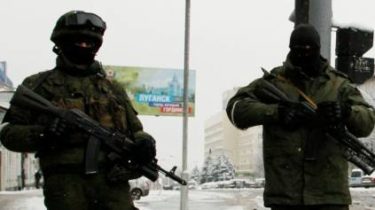 The militants of illegal armed groups on Sunday six times shelled the positions of Ukrainian military in a zone of carrying out anti-terrorist operations. Ukrainian troops twice opened fire in response.

On Lugansk the direction the epicenter of the tension was Svetlodarsk arc. Pro-Russian mercenaries from heavy mortars 120-mm fired at positions of ATO forces around Lugansk, Lozovoy and Novoluganskogo. In General in the area, the militants fired nearly 70 ammunition.

Residents Trinibago Gladosovo left their homes due to militants – JCCC

On Donetsk the direction from 82-mm mortars and infantry weapons separatists fired at Lebedinskoe and rocket-propelled grenades of various types fired in the suburb of Avdeevka.

We will remind, for the last day, 16 December, the situation in the zone of the Antiterrorist operation difficult. As a result of enemy shelling four Ukrainian servicemen were injured. Russian-terrorist troops 31 times fired at positions Armed forces of Ukraine. In response the Ukrainian military 22 times suppressed the firing activity of the occupants of the Minsk agreements not prohibited weapons.