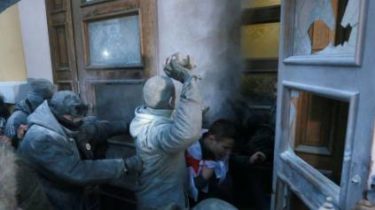 The Ambassador of Canada in Ukraine Roman Vashchuk and UK Ambassador Judith Gough condemned the clashes with police near the October Palace on the street Institutskaya in Kiev that provoked the participants of the “March for impeachment”, organized by the leader of the “Movement of new forces,” Mikheil Saakashvili.

“Attempts of takeover and destruction of public buildings is an abuse of the right to peaceful protest,” wrote Roman Vashchuk in Twitter.

In turn, the UK Ambassador Judith Gough has shared a tweet Vashchuk and added that he fully agrees with him.

I completely agree with my Canadian colleague. Attempts of takeover and destruction of public buildings is an abuse of the right to peaceful protest https://t.co/iNEXse9wt9

We will remind that on December 17 in Kiev, clashes broke out between supporters of Saakashvili and the police. Activists tried to break through to the October Palace after summoning Saakashvili to create coordinating staff.

After a failed assault on the Palace, Saakashvili went to the Verkhovna Rada.

The police filed a case on the fact of attempt of capture of the October Palace.