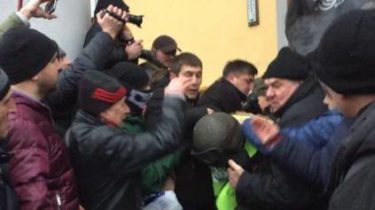 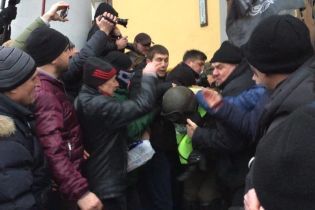 In fact attempts to penetrate into the building of the Zhovtnevy Palace in Kyiv instituted criminal proceedings. This was announced by first nastpny head of the national police Vyacheslav Abroskin.

He stressed that the building proihodit children’s party, when he was trying to capture.

“Celebration for children in the October Palace is, perhaps, unknown to them and that police and national guardsmen for their own safety, for the safety of peaceful Kiev. On this fact the criminal proceedings. All those involved in the seizure of the building will be installed. The perpetrators will be brought to justice,” – said the policeman.

Just awful, beyond the bounds of possibility. Someone does not know how to bring yourself attention, so ready for anything, even…

The press service of police said that as a result of events under the building of Zhovtnevy Palace, investigators began two criminal proceedings: under article 15 of V. 341 (attempted seizure of state or public buildings or structures) and article 345 (Threat or violence concerning the employee of law enforcement body) the Criminal code of Ukraine as among police officers and national guardsmen are injured. Security forces also noted that is investigative-task force activists were not allowed into the room and used tear gas. The issue of opening of criminal proceedings, V. 343 (Interference in the activity of worker of law enforcement body) the Criminal code of Ukraine.

As previously reported, on December 17 after the March star impeach Mikheil Saakashvili announced the establishment of the headquarters the building of the Zhovtnevy Palace. Went there the politician and his supporters. Security forces refused to let the protesters into the building, because there was held a children’s holiday. Under the building there was a fight.