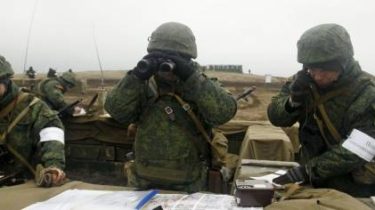 According to intelligence reports, 19 December, because of the statements of the defense Ministry about the intention to withdraw the Russian officers from the Joint center for control and coordination of questions of ceasefire and stabilization of the demarcation line, the militants may resort to aggressive offensive operations across the line of clashes in the ATO.

It is noted that terrorists plan to enhance its DRG on military facilities of the Armed Forces of Ukraine, objects of energy and transport infrastructure, to increase the number of provocative attacks in the direction of the Ukrainian

positions and residential quarters of settlements near the line of demarcation.

THE PRESS CENTER OF THE ATO HEADQUARTERS REPORTED! According to intelligence reports, December 19, through the statement of the defense Ministry about the intention to withdraw Russian…

Posted by the Press center of staff ATO on Sunday, December 17, 2017

In addition, for accusations of anti-terrorist operation forces in violation of the Minsk agreements, the militants continue to fire on their own positions of cannon artillery of large caliber, rocket systems, tanks and other weapons, the report said.

Intelligence said that the provocation aimed at the resentment of the local population with the aim of negative attitudes, and sometimes aggression towards the Ukrainian troops.

“Typically, the aggressor basically activates such provocations on the eve of consultations in the Normandy format and the meeting of the trilateral contact group in Minsk (20 December 2017), the planned visits of representatives of the OSCE, the red cross and the media to further discredit Ukraine in the eyes of the international community and allegations of violations of the Minsk agreements”, – said the military.

Recall that on 16 December it became known that the defense Ministry gave the OSCE observers a letter of intent to withdraw Russian officers from the Joint center for control and coordination of the ceasefire (SCCC) in the Donbas.