Saakashvili said in the letter to Poroshenko – media 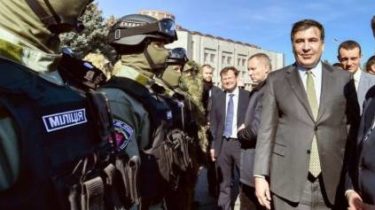 The leader of the “Movement of new forces,” Mikheil Saakashvili said that he wrote a letter to the President of Ukraine Petro Poroshenko to de-escalate the conflict and start a political dialogue.

He declared it on air of TV channel ZIK, writes dt.ua.

According to Saakashvili, he handed a letter on Bank after his release from custody.

“I did what the winners do… people are sure they are right… I told him: “You accused me wrong. You can not know that it was an insult to call me a Russian agent,” said Saakashvili.

Saakashvili added that he has no personal conflict with Poroshenko, and that he does not feel personal animosity to the President of Ukraine and respects the presidency.

We will remind that earlier the leader of the “Movement of new forces,” Mikheil Saakashvili has denied that he tried to negotiate with the President of Ukraine Petro Poroshenko and called her a fake. The politician said he was ready to meet with the President, but the cameras and in the presence of the people.

“I was told that after a few days the President is ready to meet. But I said, “No, that’s not right. I’m not the person who will be using the back door to go somewhere,” added the ex-President of Georgia.

He stressed that insists on a public dialogue with Poroshenko about ending the corruption schemes and the ouster of their beneficiaries.

“Stolen they must return, but the transition should be peaceful. The country does not have two years” – concluded Saakashvili.

Sunday, December 17, Mhala supporters of Saakashvili, led by their leader gave another “March with the impeachment”. During his speech from the stage , Saakashvili said that in the October Palace will be the “headquarters” of the protest, after which along with the protesters went there.