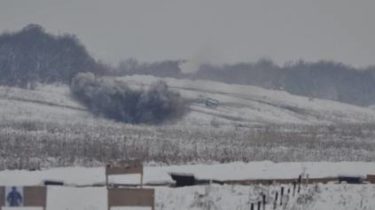 GPU once again recorded the armed aggression of Russia during the shelling of the village of Novoluganskoe, in the Donetsk region.

So, the investigation team during the inspection of the scene once again found evidence of the presence of Armed forces of the Russian Federation on the temporarily occupied territory of Ukraine, reports the press service of the Prosecutor General.

After attacks were found fragments of shells and jet engine systems “Grad” with markings according to the Ministry of defense of Ukraine on the armed forces never were.

It is noted that on 18 December, about 17 hours, the militants “DNR” from Gorlovka fired from jet systems of volley fire “Hail” Novoluganskoe. At the scene arrived employees of Department on investigation of crimes committed in the temporarily occupied territories of the Prosecutor General of Ukraine. Carry out Prime investigative actions.

It is established that fighters fired at least 40 rockets. The shelling was injured 8 people, including six women, one man and one child who are in medical institutions.

Also as a result of such daring and cunning of the fire damaged 47 buildings – private houses, a kindergarten, a school and a clinic.