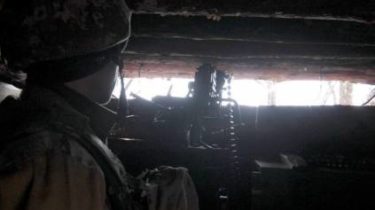 For Tuesday, December 19, militants carried out 21 times shelling in the ATO zone in the Donbas. The Ukrainian military responded 14 times.

“The situation in the ATO area remains difficult. The Russian occupation forces continue to grossly violate the peace and conduct aimed fire on positions of Ukrainian Armed forces and frontline settlements. The aggressor and use of jet systems of volley fire and mortars, are prohibited by the Minsk agreements”, – stated in the summary of the press center of staff ATO.

On the Lugansk direction militants in the afternoon of the reactive systems of volley fire BM-21 “Grad” fired on Ukrainian defensive fortifications around Zaytsevy. In General, released 20 rockets.

“In addition, the positions of the Ukrainian defenders in the area, the enemy shelled with mortars of various types and APCS. Also from heavy 120-s mortars and the entire spectrum of infantry weapons, the invaders fired near Trinity, Novotoshkovskoye, Novoaleksandrovka and Novoluganskoe. Small arms militants violated a truce near Lugansk”, – stated in the message.

In Donetsk direction militants fired seven mines of the 120th caliber on Water, endangering the civilian population. The consequences of shelling out. Mortars of various types of militants opened fire near Pavlopol, Lebedinsky, Sand and Heater. And rocket-propelled grenades fired at Avdeevka and Novotroitsk.

We will remind, after shelling Novoluganskogo found fragments of shells with Russian markings.