Due to the heavy snowfall in Kyiv region there have been 130 accidents, there are victims 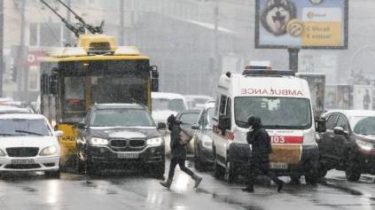 As at 23:00 Monday 18 December due to heavy snowfall in Kiev region was 130 road accidents.

This was announced by the speaker of the police of the Kiev region, Nikolai Zhukovich, reports UNN.

According to him, the vast majority of accidents recorded mechanical damage to the car. In those accidents injured six people.

Meanwhile, the capital rescuers round the clock patrolling snow-covered Kiev to provide assistance to vehicles stuck in snow drifts. They have already helped 12 cars that are stuck in the snow.

Disappointing Outlook: the night the capital is expecting another big storm, snow and sleet

Lifeguards are on duty in places of their possible involvement:

We will remind, the snow-covered capital in the morning, after which the roads of the city paralyzed traffic. And the capital airport “Kyiv” in Zhulyany, due to the bad weather temporarily moved some of the flights to Boryspil.