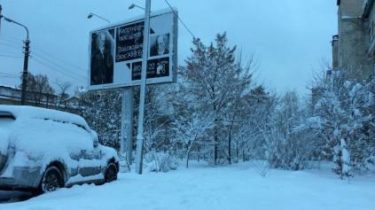 Snow collapse turned the second day of snowfall in the capital. In the morning, thousands of Kievans were not able to get to work and study from-for not cleared away roads, says the story TSN.19:30.

“Nothing brushed – awful,” complained pedestrians on Svyatoshino, Kyiv, troyeschina and in other areas. Some snow piled up to the waist, covered Parking, stops lined up in long lines. “Bus full, transport rarely goes”, – told the witnesses. Did not have time to clear the streets communal even in the center – the janitors explained that I work from 4:00 in the morning, but to cope with the snow still can not. Snow slush, and lake water and drifts formed even on the tramways at the hem – people complain about wet feet, and state that to the winter town was not ready.

Videosnew paralyzed traffic on the streets of the capital

But the Kiev authorities report that the snow is removed 600 pieces of equipment and more than 6 thousand people, and their work was evaluated on a solid four. And complain that technology is sufficient, its on the street brought even the Ministry of defence, but not enough people. Priority call the main thoroughfare of the city. Meanwhile, forecasters predict that the snow in Kyiv will go on Wednesday.

The snow Apocalypse has covered the Ukraine. The effects of the weather

As previously reported, the night in Kiev was working snow removal equipment. Take a look at her work went the mayor Vitaly Klitschko. He had an argument with the driver of one of the trucks, which, contrary to the decree, entered his car in Kiev. At the entrance to Kiev from Boryspil, Bucha stand kilometer queue of trucks in two rows – they are not allowed in the capital, not to create in the city streets even greater congestion. In connection with difficult weather conditions the traffic at the entrances and exits of the capital is still difficult. However, the trucks on the territory of the city has already passed, said the patrol police Department of Kyiv.