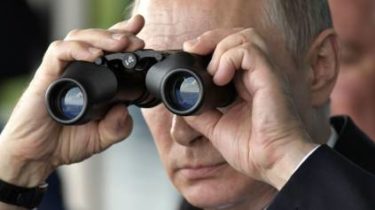 The output of the Russian officers from the Joint center for control and coordination of the ceasefire in the Donbass means that the President of Russia Vladimir Putin wants to impose its own scenario of the UN peacekeeping mission and to continue the legalization of militants.

So according to MP, the coordinator of group “Information resistance” Dmitry Tymchuk.

Ukraine now asks for the placement of UN peacekeepers throughout the occupied territory of Donbass, in particular, on the border with Russia. The exit of Russians from JCCC on the background of the escalation of the armed conflict on several front-line areas, according to Putin’s plan, should attract the attention of the EU and US to the demarcation line of the parties. It is here that Russia insists to place a peacekeeping mission, not on the site of the uncontrolled border of Ukraine and Russia.

Tymchuk sees in the recent events in the Donbass and the desire to legalize “DNR/LNR” through JCCC. He drew attention to the recent statement by the leadership of the militants that after the departure of Russian troops in the JCCC will remain the representatives of the “DNR”. Thus, the illegal armed groups will participate in the official structure.

“This step is an attempt of Russia to squeeze something out of the situation around SCCC, which will disappear after the adoption by the Verkhovna Rada of Ukraine the bill No. 7163 on de-occupation of Donbass”, – Tymchuk notes.

In the future we should expect even greater growth in the activity of militants and a serious worsening of the conflict in the Donbass, said the Deputy.

Regarding the “new strategy” of Putin in the Donbas, Putin’s Statement about “the low efficiency of the Minsk format” (though …