The projectile “Castle” in the car and a fragment of an inch from the head: as residents Novoluganskogo survived a horrific fire fighters 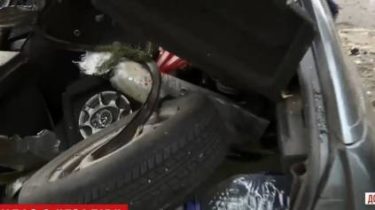 The occupants of some areas of Donbass struck the AFU positions in the area of Zaytsevy of reactive systems “Grad”. While it is known about two dozen missiles, information on victims did not arrive, according to a story TSN.19:30.

Meanwhile, in novoluhans’ke that fighters fired from “Gradov” on the eve, people continue to recover from the experience, take the loss and clean up the devastation. Their work there has made the Ukrainian sappers searched for possible unexploded pieces of ordnance that could explode and cause new harm to local residents. Only damaged about 30 private homes, 10 apartment buildings and infrastructure. Some houses can not be recovered – the people with the horror tell how fled headlong from the attack in the basement. “Bully! For that shoot people,” – cried one of the local residents.

Resident Novoluganskogo Joseph Dalnauka because of the fire lost the garage – blew him to smithereens. “Well, at least the water was. Firefighters arrived on time, everything here is burned. The fire was knocked down, and that puffed – I was flooded up to 11 a night,” said the man. His wife, Maria Ivanovna miraculously survived, because the shrapnel flew straight into the house, passed a few inches from her head and smashed a huge hole in the floor. “By me flying the red, as if burning, the smoke went. Tripped, fell. Previously only on television that has seen war” – cried Maria Dalnauka.

Someone finds the strength to treat the situation with humor. For example, the military Peter, whose car went through the war, and now “caught” one of the shells in the Parking lot. The body of the rocket stuck in the metal of the car, but did not explode. “Lutsk Assembly Vase is stronger than the Russian “Grad” – ironically the owner of the mangled car. In General, military associate for the first time ATO a powerful blow to Novoluganskoe with the release of Russian observers SCCC, is mistakenly up to fifty shells could not clearly get into such a number of houses and infrastructure. Because MLRS “Grad” is not easy for the maintenance and use of weapons, and a car costing two million, no one “simple miners and tractor drivers” will not give.

In the morning residents Novoluganskogo distribute humanitarian aid: the materials for the most urgent works in ravaged houses, blankets and offer to feed hot food. Instead of schools and kindergartens, children with adults helping to clean up the rubble. The city is still repairing the electricity and gas when they appear in houses nobody undertakes to predict. The only thing now I hope the locals is that the RAID rockets were one-off thing and will not happen again.