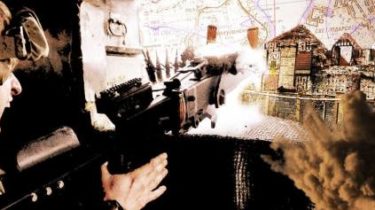 Monday, December 18, in the Donbas , the militants opened fire from “Grad” in the village of Novoluganskoe, which is located near Svetlodarsk.

As a result of shelling injured 8 people, including one child. 6-year-old girl who had a trauma, is now in the hospital.

Also heavy weapons were damaged 50 buildings, including schools, kindergarten and medical and obstetric point. According to the Department of communication of the police of the Donetsk region, police guard the damaged area from looting, document the effects of the attack and help the civilians.

The village had damaged a power line and the pipeline, the population is partially left without light and heat. The building Novoluganskogo the village Council has deployed an operational headquarters, on a place rescuers work. Note, in novoluhans’ke home to more than 3.7 million people, including more than 500 children. It is there on the eve of the escaped inhabitants of the liberated villages Travneve and Gladosovo due to the endless attacks of the militants. However, the shells of fighters and flew to the village.

Cynical Novoluganskogo shelling and military activity in the arc Svetlodarsk. A day in the area ATO

According to the head of the Donetsk HAV Pavlo Zhebrivskyi, the Russian mercenaries fired at least 15 shells. Today, December 19, GPU reported that once again documented the armed aggression of Russia during the shelling of the village new Lugansk, in the Donetsk region. So, the investigation team during the inspection of the scene was discovered the presence of Armed forces of the Russian Federation on the temporarily occupied territory of Ukraine, reports the press service of the Prosecutor General. After attacks were found fragments of shells and jet engine systems “Grad” with markings according to the Ministry of defense of Ukraine on the armed forces never were.

The headquarters of the ATO noted that at the Lugansk direction the epicenter of tension remains Svetlodarsk arc. Here in the evening, the militants with heavy artillery of caliber 152-mm mortars, grenade launchers and machine guns fired on the positions around Luhansk. In the same area of the 120-mm mortars fired at military in Zaitseve and Travneve.

During the day on the front line killed three Ukrainian soldiers. In zaytsevo fighters were just in the dugout – because of the explosion killed two Transcarpathians and one soldier from Chernigov, who served in the 128th brigade. Another eight soldiers were wounded on the arc Svetlodarsk. The headquarters of the ATO predicts increased pressure of militants in connection with the decision of Russia to remove its military from the joint coordination center and cease-fire. 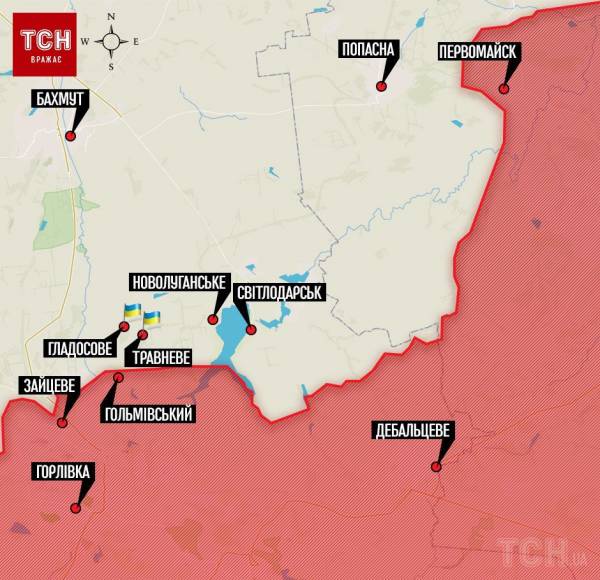 Meanwhile, Ukrainian blogger and doctor Alexander Chernov said that according to his information, as of five o’clock in the morning of December 19 in close proximity to occupied Gorlovka were killed four militants and 9 wounded. Also in the Luhansk region, temporarily occupied Pervomaisk Ukrainian soldiers were wounded at least 8 militants, three more were destroyed. While official confirmation of this information.

Today, December 19, according to the ATO headquarters after attack Novoluganskogo reactive systems of volley fire was released ten artillery shells of calibre of 122 mm and more than forty heavy 120-x min near Travneve. And about twenty rounds of 122-gauge exploded around Gladosovo.

It is worth noting that at the end of November due to lightning special operation under the control of Ukraine returned Travneve and Gladosovothat near Svetlodarsk, Lugansk region. These settlements were in the so-called gray zone, where anarchy reigns, where mercenaries shelled Ukrainian positions. However, according to the officer of the General staff of the Armed forces of Ukraine Vladislav Voloshin, the village, “had not been freed” because they were located on government-controlled territory. Voloshin noted that, according to the Minsk agreements, the Ukrainian military controlled the territory may conduct any action to change the tactical situation and redeployment of units.

After taking control of the new positions of the Ukrainian military on both sides are getting closer and closer to Gorlovka – a huge industrial city. But until the demarcation line under the Minsk agreements for a very long time to go because it is for Debaltseve, which the Ukrainian military have left in 2015.

Also in early December, the paratroopers of the 95th Zhytomyr brigade also took control of the village Verkhnetoretskoye Donetsk region, which is located on the road Yasinovataya – Gorlovka. The Ukrainian military has controlled only the North-Western outskirts. Militants “DNR” were in the South. The Item took place through smuggling routes, and shops in the occupied part of the village worked in rubles, and the people lived on Moscow time.

All of these events have affected the mood of the militants, they began to lose their positions and retreat and continue to actively shoot with heavy weapons on Ukrainian villages. Fighters can’t calm down after losing control of two villages near Svetlodarsk. In particular, per night for Gladsome and Travneve can arrive in fifty minutes the Terrorists want to force the Ukrainians to retreat, but that only gives the opposite effect.

TSN.ia found out what is happening in the arc Svetlodarsk why this direction is the hottest and what to expect from the militants further.

Military TSN correspondent Andrew Tsaplienko said that the enemy does not give rest to our liberated villages, which is why they shoot civilians with “Grad”.

“Two weeks in a row they beat from artillery through the village Travneve (former metalhead) and Gladosovo. In the end, unable to bear the nights in basements, many residents left in Novoluganskoe, which a year ago came under the control of the Ukrainian army. And now, today, at about 17:00 Russian mercenaries began firing Novoluganskogo “Grad”. Reactive “Grad” beat not a point but on the area. To be clear, the “separable” shell not the military, and houses. Right now. The house on fire. Among civilians there are wounded”, – said Tsaplienko.

According to him, it also became known that divisions of Russians, who are the “second tier” behind the militants who carried out the study: “Their legend explains a lot. The ousting of Ukraine’s Armed Forces from the villages in the front line”.

“The pieces are coming together. They are not going to cease fire. On the contrary. The frozen conflict they want to unfreeze. And to get at least some wins. Before the “elections” Putin. Are you ready for the Ukraine?” he added.

Today, December 19, it became known that Russian and Ukrainian representatives at SCCC left the occupied Lugansk. On the eve of the Russian foreign Ministry has announced the withdrawal of Russian JCCC representatives from the Donbass. As their representatives, allegedly, “has faced serious difficulties because of the position of the Ukrainian authorities.” The Ministry of foreign Affairs of Ukraine called the move another provocation, which significantly undermines the Minsk agreement.

Also , the Ukrainian foreign Ministry saidthat this decision, the Kremlin significantly increases the risks for the security of the SMM, the OSCE, in particular, to dictate to Ukraine and its international partners unacceptable accommodation of UN peacekeepers in the Donbas.

In the so-called “people’s militia “DNR” do not exclude that the withdrawal of the Russian side of SCCC will lead to the aggravation of the situation in the region.

Now Russian and Ukrainian officials left the so-called “DNR” and are already in government-controlled Soledar. It should be noted that Ukrainian officers remain JCCC in Soledar in the future and will contribute to the work of the OSCE mission.

Meanwhile, the militants “DNR”, despite the suspension of Russian JCCC representatives, intend to continue work in normal mode, and to engage in dialogue with representatives of the OSCE SMM, and the Ukrainian side.

Video”It’s time to change your attitude”: the delegation of the US military assessed the situation on the arc Svetlodarsk

The Russian representative office SCCC gave the contacts of the militants “DNR” in the Common centre of the management of SMM OSCE for further interaction.

According to political and military experts, the decision of Russia to withdraw from Ukraine all their military, representatives of the Russian Federation at the JCCC, is part of the hybrid war waged by Russian President Vladimir Putin.

In turn, the representative of Ukraine in the working sub-group on the security of the Trilateral contact group Yevhen Marchuk said that the withdrawal of Russian troops from part of the SCCC almost make it impossible to ensure the regime of silence, if it is to be concluded in Minsk on 20 December.

He recalled that on 20 December will be the last in this year’s 73rd round of talks in Minsk, the agenda of the working group on security issues is the attempt to negotiate a ceasefire across the contact line, at least for the period of Christmas and new year holidays and winter vacations.

“How to achieve this, technology has been developed and tested, it worked in 2016 when then managed to hold on to silent mode for 6 weeks. The so-called bread and school truce in 2017 was unsuccessful. A very important role in ensuring that technology plays a military Joint center for control and coordination (JCCC), which includes Ukrainian and Russian military. Unlike the patrols of the OSCE SMM, they have the power and can quickly intervene to stop the violation of silence regime. Russian military in violations of ORDA, and Ukrainian – by the APU. The action of the Russian leadership to withdraw its troops from part of the SCCC will almost make it impossible to ensure the regime of silence, even if an agreement is reached tomorrow,” said Marchuk.

– It is not so simple. Now the question will be more complicated. One should not expect a decisive and overt actions. But in the area of collision possible new Hobbies settlements as a gray area and not only. Possible attacks on our troops on the front line and so on. The aggravation will go active. Perhaps would be more actively carried out sabotage work. The reason of this issue is the fact that Russia now wants to prove that she is on the electoral stage and it is not up to it and she needs it. But it’s not. I believe that the militants are now taking a more assertive and active stance on the line of contact. They will not recapture the territory, because for them it doesn’t matter. They will now be even more to shoot at civilians and say that we do. Their provocations will become more active in order to discredit us. For the New year maybe there will be some lull, however frail.

No one knows how it will be then. And with respect to those settlements that were in a gray area, so they are controlled by us, but then it is a grey area because there are very fast things can change. The militants will not take these areas, they do not need them, they will just continue pouring the blood around where it is convenient for them.