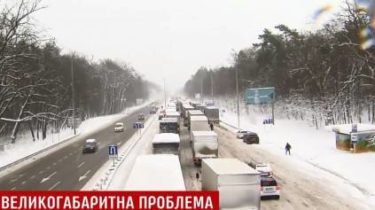 Hundreds of people were forced to walk to Kiev for the accumulation of trucks on uncleared roads at the entrances to the capital. In continuous traffic jams not only stopped the large transport, but taxis and cars, so the passengers just lost their nerve, and they went their own feet, says the story TSN.19:30.

“The hour is coming”, “the bar exam”, – explained the people who were walking on the roadside along the tube. It arose from the fact that the police last night blocked the trucks the way to the city, and those gathered so many that to go further was almost impossible for other types of transport. “No the road is not clean. Yesterday Kiev had not been cleaned, nor today,” complains one of the drivers of the trucks. The utilities also argue that can’t work on the road, because there are trucks, and this “vicious circle” appeared at all entrances to the capital.

Videogratuite caused traffic jams at the entrances to the capital

Just after lunch the engines of the trucks roared again – they had begun to pass, but not in a city, not a bypass road. Drivers didn’t like it, somebody ran, despite the ban, in Kiev itself, but the first lifts stalled and created a new tube. To pull such machines, the city authorities used military Armored personnel carriers. At a government meeting Prime Minister Vladimir Groisman ordered to resolve the issue of blocked roads until Tuesday evening.

Experts on traffic safety say that the problem with the trucks to quickly solve extremely difficult because it is complex and requires the construction of new roads or septic tanks for trucks. “The question has long been raised to make the bypass of Kyiv. Provided for the establishment of logistics centres along the road, not in the city. To heavy not moved to Kiev”, – said the expert Alexander Kryzhanovsky. While such sites, bypass or transshipment centers, the truck drivers remains one option – to move through the snow-covered Kiev, so with this problem the capital during the winter will occur more than once.