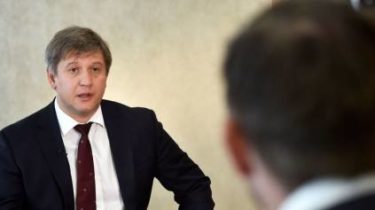 The Minister of Finance of Ukraine Alexander danyluk demands the immediate resignation of the General Prosecutor of Ukraine Yury Lutsenko.

He stated this during a press conference in Kiev.

According to the Minister, the reasons for this are discrediting Lutsenko attacks on new anti-corruption bodies and powerlessness to bring to the court important for the country. “In the context of this “accidental” meeting in Amsterdam Yuriy Lutsenko, Igor Kolomoisky just before the trial in London raises even more questions. Therefore, it discreditied before the Ukrainian people and the international partners of the President and the Parliament who have entrusted him with such an important function and authority in General, and therefore, should resign. I demand the resignation of Prosecutor General Yury Lutsenko”, – said the head of the Ministry of Finance.

Lutsenko told about the meeting with Kolomoisky in Europe

In addition, he accused the Prosecutor-General allegedly delaying the process of investigating possible abuse by former owners and top-managers of “PrivatBank”. In the case of existing managers Bank, Finance Ministry and the NBU actively prosecute and the investigation is ongoing.