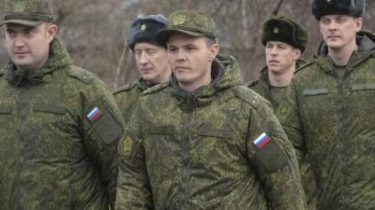 Russia has decided to withdraw its military from the Joint center for control and coordination of questions of ceasefire and stabilization of the demarcation line, to force the Ukrainians to negotiate directly with representatives of ORDA and demand the lifting of sanctions.

About it the representative of Ukraine in the working sub-group on the security of the Trilateral contact group on settling the situation in Donbas Yevhen Marchuk wrote on his page in Facebook.

Russia is ready to return its military in SCCC – Marchuk

“At first it was organized by the sharp increase in attacks on our positions, using “Grad” and artillery of large calibers, attacks on settlements, in particular Novoluganskogo (8 people were injured, dozens of houses destroyed, including multi-storey), to further strengthen the escalation, and then a conclusion of the Russian military from SCCC. Stands for is something like this: want to handle it – discuss it directly with ORDO, now we’re not going to do, we go out of SCCC. Our Russian troops in Donbass” – he said.

According to Marchuk, thus Russia is trying to force the lifting the sanctions imposed against it.

“The main purpose of the action with the withdrawal of Russian troops from SCCC is to have us negotiate directly with ORDO that Russia had reason to say, see, we told you that they have a civil war, and they directly began to agree… and we the peacemakers mediation, so the sanctions should be canceled,” he said.

Also Marchuk explained that SCCC among other things had the function of reconciling the decision of problems in interests of the civilian population, namely, repair of critical infrastructure lifelines.

“First you need to apply to SCCC. Ukrainian and Russian military in the SCCC review the application and negotiate with the military verticals sides. And if so a joint decision on full guaranteed ceasefire on this site… then patrol the OSCE and the Ukrainian-Russian joint patrol SCCC go to the place, which means that at the time of their stay there, cease fire on both sides. After 1-2 days of silence regime, overseen by the OSCE SMM and JCCC joint patrols, the plant engineers (sometimes both sides) that need to clear the destroyed object and all the surrounding territory,” he said, adding that the JCCC patrols and then check each side to the quality of clearance, and also operates a joint patrol.

According to the representative of Ukraine in the sub-group on the security of the Trilateral contact group then organized security cleared facilities and the territory, which comes to the advanced group of repairmen studying the scope and nature of work.

“After completion of repairs need to arrange security personnel who must work on these objects. And since the property is situated on the front line, without JCCC this will not solve the problem. And then a dozen more problems to solve with the participation of JCCC,” said he.

Separately Marchuk said the issue of withdrawal of military units to the desired distance from these objects to create a security zone around them that much more difficult solved without JCCC.