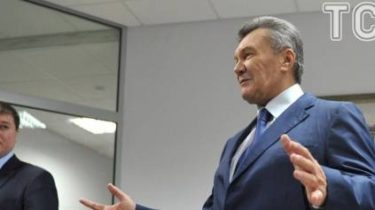 On 20 December, the Swiss Federal Council decided to extend the freezing of all accounts of the former President of Ukraine Viktor Yanukovych.

It is reported by the European true with reference to the Federal Council.

Videosu questioned Yatsenyuk and Avakov in the case of Yanukovych

Sanctions extended against not only Yanukovich, but also against his environment and other individuals associated with him. Switzerland also extended the freezing of the accounts of the deposed former President of Tunisia Ben Ali.

The purpose of this decision is to support the judicial cooperation between Switzerland and the two countries. The Federal Council expects that another extension of the sanctions will help to achieve tangible progress in the trial of Yanukovych and increase the likelihood of a return of assets in the country of origin.

The court arrested 10 Swiss Bank accounts of the son Azarov

Sanctions against Yanukovych act in 2014. 9 December 2016 the Federal Council of Switzerland announced its decision to extend the measures to freeze all assets of Yanukovych, in Switzerland, as well as other individuals from Ukraine, which probably are associated with it. Among other things, the report reveals that “we are talking about assets worth approximately 70 million Swiss francs” (without specifying to whom such assets belong).

“Alexander Yanukovych has always maintained that he has no personal Bank accounts or assets in Switzerland, with the exception of the company Mako Trading SA, which has in Switzerland is transparent and subject to audit account, which is about 1 million Swiss francs” – said the press service.

Recall on November 28 Yuriy Lutsenko to Svyatoshynsky district court of Kyiv announced that Viktor Yanukovych declared suspect in treason – the content of the suspicion announced orally, and the notice was sent to all known addresses of the former President. On the same day after reading this suspicions the Military Prosecutor presented his lawyer Igor Fedorenko present in court.