In Britain, a man wanted to commit suicide because you don’t like David Beckham 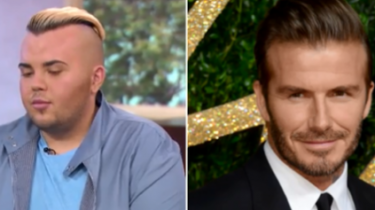 21-year-old Briton from Nottingham Jack Johnson was so obsessed with the personality of the legendary ex-footballer David Beckham, has spent 20 thousand pounds on plastic and cosmetic surgery, to be like him. However, he failed to achieve, and this man began to visit thoughts of suicide.

He told this edition of Daily Mail.

After many attempts to look like a former football star, doctors diagnosed Jack dysmorphia, that is, the disease, which is excessive self-criticism regarding their appearance. He said that the reason for this, by and large, is the obsession of the British Beckham. Now Jack Johnson is engaged in the liquidation of gastric banding, which he did for weight loss, as well as pumping out fillers for the face. He believes his past attempts fail and appealed to young people to encourage not trying to be like celebrities.

“I want other young people know that they don’t need to look like a hot celebrity. You have to love yourself and be happy with the body that you have. I don’t want young people imitated what I did, and then regretted it,” said Johnson.

However, he did not cease to admire David Beckham. Jack said that is not going to go to work, because he is part of brand Beckham.

“I’ll enjoy these benefits as long as possible. I am part of the brand “Beckham”, you would not have seen David worked in the “McDonald’s”, right? Then why should I work?” he added.

Recall, Rodrigo Alves from Brazil, who is known worldwide as the “Real Ken”, told about how he became what he became, writes Unilad.