The dollar increase of salaries and development of the national economy. Key points of the press conference, Groysman 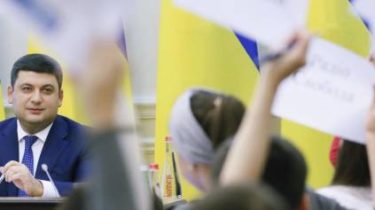 Prime Minister Vladimir Groisman said the development of the national economy, a key challenge for the next year and reported on the achievements of the government during heavy outgoing year.

He declared it on total a press-conference in 2017.

“It is time for responsible politicians, when the politicians don’t just say and responsible for their words. Not a single day this year for me has not been easy. You never know where you will be a challenge, but the road by walking. I am convinced that in 2018, I’m going to continue to make Ukraine better. Will growth will be stable situation in all spheres of life,” he said.

According Groisman, now driver of the economy is the agricultural sphere, industry, modernization of infrastructure.

“The task is value added. To move away from commodity type to create a specific product. The first 4 billion to support livestock production. We started the development and support of agricultural machinery. Social benefits dependent on the performance of the national economy. Saturate the market of national production, support the export of finished products. All this will give us confidence in the 2018 and subsequent years”, – said the head of government, stressing that it is necessary to buy Ukrainian and to pay Ukrainians, creating appropriate conditions for the development of the national product.

Regarding the law #Cuuuutest: I support that we need to buy Ukrainian and to pay Ukrainians, to create appropriate conditions for the development of the national product. But there are many controversial issues, have a professional discussion in order not to violate international obligations.

He also suggested that next year the average salary of Ukrainians could rise to 10 thousand hryvnia.

At the same time, the Prime Minister predicts that in January 2018 it is expected the stabilization of the dollar.

“The fluctuations are seasonal in nature. In December it’s always the case. In January is expected to stabilize. The predicted rate is only a forecast. There is no reason to expect major fluctuations in the exchange rate,” he said.

Groisman also said that the current heating season there is no reason to raise gas prices.

“More than 2 years we live without Russian gas. But I put another task – to live without a drop of imported gas. Goal: build a system of national gas production, so we can be an exporter. I want the price of gas in Ukraine were fair. I am convinced that we will be energy independent country. December 15, beginning to work the Supervisory Board of “Naftogaz”, they face the task of de-monopolization of the market”, – said the head of the Cabinet.

Separately, the Prime Minister touched on the sale of Ukrainian land.

“Land turnover should be the backbone of Ukrainian farmers. I have to sell the Ukrainian land, the Ukrainian farmer (in limited quantities). I am against the sale of large agricultural corporations. I am in favour of a farmer possessed of land, to have access to credit to work in rural areas”, – he added.

Land turnover should be the backbone of Ukrainian farmers. I have to sell the Ukrainian land, the Ukrainian farmer(in limited quantities).
I am against the sale of large agricultural corporations. I am in favour of a farmer possessed of land, to have access to credit to work in rural areas pic.twitter.com/cuod2jC5Vt

Among the key objectives for 2018 Groysman called: accelerated economic growth, ensuring normal work of people and the security of the country.

“We will send next year’s 16.5 billion UAH of production of new weapons and modernization. We do what people need. Build more quality links with citizens,” he said Groisman.

Finally, he thanked the journalists and assured that next year sees optimistic.

“Of course, nothing comes easy, but I’m ready to fight. The path of growth of Ukraine is inevitable. Continue to work on behalf of Ukraine and Ukrainians,” – said Groisman.

Thank you reporters for your interesting questions, I was open and candid with you. See optimistic next year. Of course, nothing comes easy, but I’m ready to fight. The path of growth of Ukraine is inevitable. Continue to work on behalf of Ukraine and Ukrainians. pic.twitter.com/bGBG99Nwcj

We will remind, earlier the Prime Minister-the Minister has noticed that there is no point in creating a government of the Crimea on the mainland Ukraine: “as for the Crimean subject and situation with the Crimean Tatar community if there are any specific questions, we solve them fast enough. And, probably, creation of additional institutes – not in this sense”.