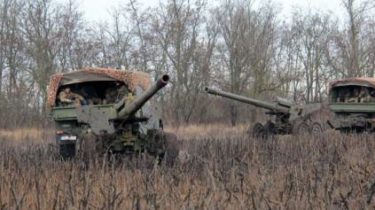 In the area of ATO, the night before Christmas-Christmas truce has not passed quietly.

“The Russian occupation forces continued to flagrantly violate the ceasefire and carried out a well-aimed attacks on positions of the Ukrainian Armed Forces, using prohibited mortars and artillery. In the Luhansk direction, in the second half of the day, the enemy of 122-mm artillery systems fired at our positions on the outskirts of the Old Aydar. Mortars 120 caliber opponent used Oborona Trinity, May and Luhansk. Defenders of Novoaleksandrovka and Zaytsevy Russian mercenaries fired from infantry fighting vehicles, grenade launchers and machine guns”, – stated in the message.

In turn, in the direction of Donetsk under mortar fire of the invaders captured the strongholds of ATO forces near Avdeevka, Food and Pavlopol.

A few hours before the agreed ceasefire, the militants continue to fire from tanks. Chronicle of the ATO

“In cases that presented the greatest danger to staff, the Ukrainian soldiers gave the aggressor adequate fire response”, – noted in headquarters.

As a result of shelling injured one soldier, another was fighting injured and one died.