In Kiev between protesters on Independence square clashed 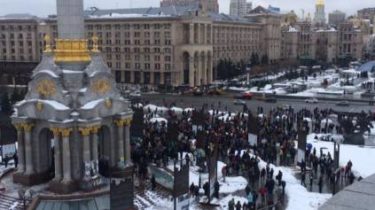 On the Independence Maidan in Kiev between protesters clashed.

Nobody has suffered, transfers gromadske.

It is reported that fighters of a battalion “Azov” and other military staged an argument with the Advisor to the President Yury Biryukov.

They demanded that he refute the reports that Mariupol was liberated by the soldiers of 72 brigade, not “Azov”.

“I talk with the soldiers of 72 brigade, who say that they also worked there. I have no reason not to believe them,” — said Biryukov.

In turn, one of participants of the action “Coffee on Khreschatik” during the dispute pushed and tried to pull the fighter of “Azov”, the battle began.

At that time Biryukov pulled in the other direction and he disappeared.

We will remind, on the Independence Maidan in Kiev opponents Mhala Saakashvili, the indignant marches of the former head of Odessa region gathered to share “Coffee on Khreschatik”. They drink hot drinks and treat people with candy Roshen. On the page in Facebook dedicated to the project, the purpose of the event is to show people something different from the “weekly political bacchanalia and attempts to storm the October Palace”.