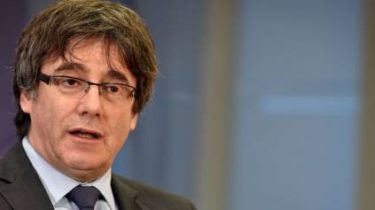 The former head of Generalitat Catalonia Carles Lucdeme, a fugitive from Spanish law in Belgium, said that Spain should allow him to return to Catalonia to occupy his earlier position.

“I want to get back to Catalonia. I would love to go back now. It will be good news for Spain,” said the ex-leader of Catalonia.

He said that is a legitimate prezidentom of Generalitat Catalunya, so in the same post and must return home, otherwise the Spanish authorities violate the principles of democracy.

“If I’m not allowed to return as President, it would be a serious anomaly for the Spanish democratic system, said Pujdeme. – I am President of the regional government, and I will be the President, if the Spanish state respects the results of the vote”.

He also noted that he is a supporter of dialogue between the governments of Spain and Catalonia.

“If the Spanish state there is a proposal for Catalonia, we have to listen to it”, – said Pujdeme.

Earlier it was reported that the former leader of Catalonia Carles Pujdeme after the success of the Pro-independence regional elections requires the Spanish authorities to abolish the 155-th article of the Constitution about the direct rule of the centre.

We will remind, earlier deputies of the Parliament of Catalonia voted for a Declaration of independence from Spain. Madrid following this decision suspended the Executive power of Catalonia, dissolved the regional Parliament. At the same time, many governments called for support of the integrity of Spain.

The former head of Catalonia Carles Pujdeme fled to Belgium and said he would not return to Spain if he will not be guaranteed a fair trial. He and his four assistants are wanted on charges of sedition, abuse of public funds, disobeying authorities and the like. The separatists surrendered to the local police, and the court released them on bail. Pokdemon and four Ministers was paroled until the court will take decisions on execution of European arrest warrants issued by Spain. Before the court decision, policy must remain in Belgium.