Watch online the fabulous flight of Santa Claus around the Earth 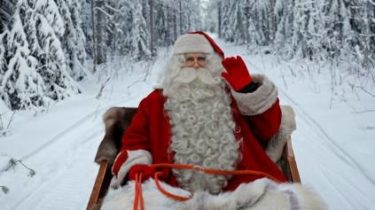 Early Sunday morning, December 24, fabulous Santa Claus started his flight on a magic sleigh pulled by beautiful reindeers. In front of grandfather is a difficult task – to circumnavigate the entire globe for the day and deliver a lot of gifts to children before Christmas.

An interactive map where you can see Santa’s flight, created thanks to the project, NORAD Tracks Santa. Traditionally, the journey of the protagonist of Christmas started in the East of the planet. Fairytale grandfather has already visited Indonesia, Australia, Oceania, Japan and Russia.

Did frost vdkev on Runnin residence

Ukraine’s Santa Claus has yet to visit. Last year he flew over the territory of Ukraine at 21:40 local time.

Now a fabulous grandpa has already ordered more than a billion gifts. The number of orders is growing by the minute.

We will remind, on Monday, December 25, Ukrainian Catholics will be the first to celebrate Christmas with the official public holiday.