Money on alternative energy. Specific examples of earnings on the sun and wind 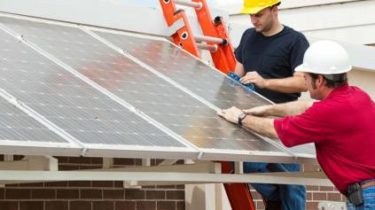 In Ukraine declared a real start of the electric revolution. Parliament abolished the excise duty and VAT on the import of electric vehicles, which reduces their cost by at least 20%. Importers of electric vehicles expect their products to next year will begin to fill in regional and district centers and prepare for the rapid development of the charging network. Innovation will only be valid for one year, decided to MPs.

Similarly, it will be with a green tariff, which makes it very profitable to install solar and wind power for homes. The world by leaps and bounds escapes from conventional energy to alternative energy. The Heinrich böll Foundation argues that by 2050, Ukraine will fully switch to renewable energy sources. We are talking about the sun, water, wind, biogas, wood energy.

Olga Yakimova installed on their home and garden areas of the solar panel. A few stations are producing 30 kilowatts. This means that every year it produces 30 million kilowatts, of which 12 thousand uses family, and the rest sold to the state at a green tariff. One kilowatt tax Kievoblenergo pay 4 UAH. For six months out of 60-65 thousand hryvnias.

As stated in the story TSN.Week, the green tariff was introduced five years ago. Briefly convey its essence, citizens purchase and install solar panels, wind turbines and other alternative power plants. The state is obliged to buy its remains. If in 2013 the green tariff for solar power plants amounted to more than UAH 10 per kilowatt, annually decreases. By 2020, the power companies should pay to Olga nearly six hryvnia per kilowatt/hour, that is more than ten thousand a month, when the sun was hot well. For the installation Yakimova paid 30 thousand dollars – a thousand dollars per kilowatt. Prices for panels fall, and the panels themselves become more sophisticated.

On Dymerskoy solar plant in the Kiev region are more than 22 thousand panels. It costs more than $ 80 million. Now the station occupies 13 hectares and could provide electricity to 3,000 houses in the surrounding villages. Soon the station will expand and will produce 50 megawatts of solar electricity.

Recovery from default. That means the winning of “Naftogaz” in court against “Gazprom”

A vivid example is the German town Feldheim near Berlin. The local community is fully nonvolatile. Citizens created Energocapital and provided with heat and electricity. The main industry here now is energy. In territories liberated after the exit of the Soviet army near 55 Feldheim put huge wind turbines. They give 250 million kilowatts a year, and the village needed only 1% of this energy. Give the rest up for sale. Subsequently, the local built a small solar power station the capacity of which is enough to provide light to 600 homes. In addition, the biogas plant works on the silo and waste. Solid fuel boiler in the winter on the remains of the village of wood heats and provides hot water.

“Naftogaz” vs “Gazprom”. Key numbers from the victory over the Russian gas monopolist

In Slavutich Kiev region are also trying to become the second Feldheimer. The city earned the largest in Ukraine biosoteria. Three boilers now heat the 40% of homes. Room heat energy willow which is grown especially in the villages of Chernigov. Over the next 5 years the city plans to equip communal facilities and the roofs of high-rise buildings with solar panels.

Every year in Ukraine increased the volumes of green energy, which gives reason to think positively about the future.

Videoslady rate: how to get from the state 65 thousand UAH for half a year by installing solar panels

Green tariff introduced was 5 years ago. Citizens purchase and install solar panels, wind turbines and other alternative power plants. And the state is obliged to buy their energy. By 2020, the Power companies should pay those who install solar panels, almost 6 UAH for kilowatts – that is, more than 10 thousand a month, when the sun was hot well. 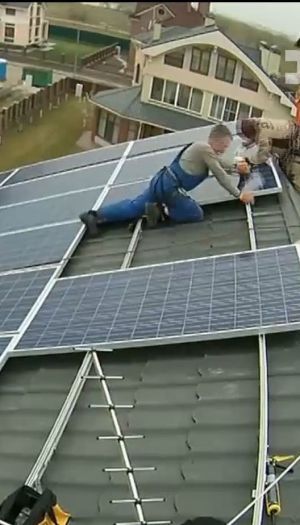