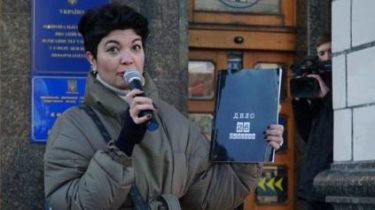 The participants of the event gathered a large package that was sent “in the Kremlin offices” in the Russian capital. In sending reports on the situation of human rights in the occupied Crimea.

Hung a “gift” to 5 kilograms, and the cost of sending a cost of 927 USD. Held in the center of Kiev near the building of “Ukrposhta”.

“New year’s eve everyone is waiting for gifts and greetings. But in Crimea, the families of political prisoners, relatives of the missing awaiting the return of their fathers, sons and brothers home. Event “Ferial gifts to Putin — a reminder of the top authorities of the Russian Federation about the terrible human rights violations in anacoana Crimea”, — quotes “Gromadska” the words of the organizers.

The Chairman of the Crimean human rights group Olha Skrypnyk noted that the hopes that the collected facts of violation of rights of Crimean Russian President will hear during the Tribunal.

“We very much hope that there will come a time when Putin will listen to the facts in the Hague,” she said.

We will remind, recently in the occupied Crimea on trumped-up charges for posts in social networks was sentenced to 2 years probation Ukrainian activist Larisa Chinese. The woman was forbidden to leave Yalta. She suffers from hypertension and not be able to see his family.