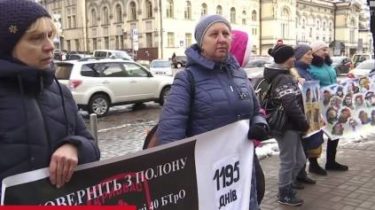 The exchange of hostages is the first and likely the only one this year to take place in a few hours in the Donbass. The militants promise to give 74 Ukrainians. Should receive 306 people. The exact place and time of exchange, the Ukrainian side calls so far.

This is stated in the story of Eugenia Tsvetinskiy in the program TSN.Ranok.

More than a year were not exchanges. The last one was released militants is a “cyborg” Taras Kolodiy and Lugansk region Vladimir Pearls.

Zhemchugova was exchanged in the fall of 2016. Man held hostage by militants after it hit a trip wire, he lost his hands, splinters wounded eyes. Despite his serious condition, the militants in captivity he was held for almost a year.

Citizen of Lviv Taras Kolodiy was released last year on the feast of Nicholas. His release was facilitated by the Orthodox Church of the Moscow Patriarchate. Kolodiy called the last released “cyborg”, the militants, he came after the explosion of the Donetsk airport in January 2015.

After this year in Minsk, the negotiators tried to negotiate an exchange all for all. The process was difficult, because the parties could not agree on the lists. And now agreed on the formula “74 306”.