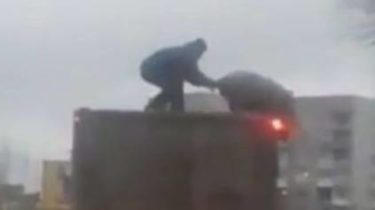 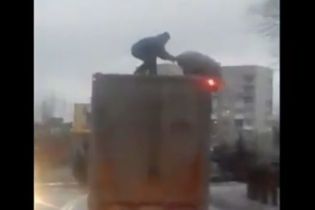 An interesting incident took the DVR is one of car in Bila Tserkva, Kiev region, reports dtp.kiev.ua on the page in Facebook.

In the video you can see the confrontation between human and pigs, which took place on the roof of the truck. The man grabbed the animal’s tail and tried to keep from the desperate leap. However, the purpose of the pig was stronger and she eventually jumped on the road and ran away.

While the fate of the animal is unknown. As well as the reasons for both persons involved in the incident got on the roof of the truck.

The epic struggle of man and pigs on the roof of the truck near Kiev to the White Church. The pig has escaped, jumped off the roof and ran away:) What was the cause of the conflict and how the parties were at the top don’t know:) See You in telegrams: CHAT for the t.me/dtpkiev @dtpkiev

We will remind, in the autumn in Cherkasy with a bucket of cops were chasing a small pig. The special operation caused a storm of positive emotions as the police and spectators. It turned out that the boar wander freely near the school and passers-by were scared that he might hurt the children.

Videokaycee the pig farmers staged a triathlon in the petting zoo