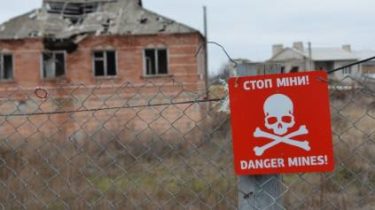 Expected called the military bombardment of the Village of Lugansk militants from heavy machine guns. The silence regime near the transition to civilian rests only in the daytime, and every night there is a provocation, says the story TSN.19:30.

“Machine gun, 5-7 bursts of 10-15 shots. On did not succumb to provocation,” – said the Ukrainian army soldiers. “During the day, usually 5-6 thousand go, but now before Christmas 10 thousand crossed,” – said the traffic at the checkpoint, the soldier with the call sign “Mosquito.” Residents of occupied territory in Ukrainian mostly go to relatives and for pensions and cheap products.

Videoroliki provoke Ukrainian troops near the village of Lugansk, to avoid withdrawal of troops

The silence mode is unlikely to work here soon. It is not only habitual violations of the agreement. Why is silence not the best representatives of the breakaway republics, see story. Not the first year the Ukrainian government is trying to fix the bridge, where people could, as in other points, to travel by car. This requires at least a week to observe silence. Is this not happening because the fighters in this area are in constant tension, to avoid the disengagement. Enemy positions are located at a distance of 300 metres, and neither side wants to concede. The intensity of the fire is different, but persistent and long-term truce near Stanytsia Luhanska, no one wants. “Maybe two days, three days in a row. There are in a day, and there are times in five days of shelling,” – explains the press officer of the APU Igor Borozdin.

Fighter “Kuzma” explains that the reason continuations are height: if there is a withdrawal, the enemy will lose profitable position. “An advantageous position, do not want to leave. Is heavy equipment there,” says the soldier. “They leave a good position for yourself in a good position for observation, fire, plus opens a direct road to Lugansk,” – said his sister, nicknamed “beetle”. And admitted that to maintain the illusion of fighting the enemy could not even aim. “You can throw a couple of grenades in their territory, they exploded – the fact that there was shelling”, – said the fighter.