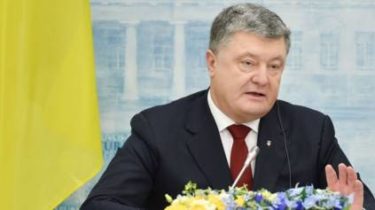 Public organization Transparency International (TI) Ukraine criticized a bill (No. 7440) Higher anti-corruption court, which has contributed to the Verkhovna Rada by the President of Ukraine. This is stated in the statement of the organization, which refer to the conclusions of the Venice Commission.

It is noted that in the President’s bill extended the jurisdiction includes a number of crimes that are actually under investigation of national police and National Bureau of investigation. This in turn loads the Higher anti-corruption court with too many cases.

Videoversion boasted achievements in the fight against corruption

In addition, according to experts, the President proposes too high requirements for candidates for judge of a High court anti-corruption. Thus, the candidate for this position except the work experience of a judge or lawyer, research activities should have experience in international activities in the field of law on combating and fight against corruption, have knowledge and practical skills of application of modern international anti-corruption standards in the sphere of counteracting and combating corruption, law of the European court of human rights. The organization believes that these requirements significantly narrow the number of potential judges.

Gerashchenko told when Ukraine will be anti-corruption court

Thus, Transparency International Ukraine calls on President to revoke the adopted document and to revise the bill in accordance with the conclusions of the Venice Commission.

We will remind, on December 26 on the website of the Verkhovna Rada published the draft law No. 7440 “On higher anti-corruption court” that was filed by the President of Ukraine Petro Poroshenko. The document identified as urgent. The highest anti-corruption court should consider criminal proceedings related to the offences that contain a corrupt component.