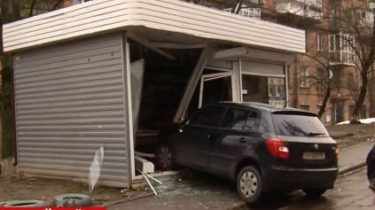 In goloseyevsky district of the capital, a car flew into the shop of food products, which at that time was buying groceries woman with 3 year old daughter. From blow the child caught in between the refrigerator and the bumper of the car, suffered a spine injury and deep lacerations of the face were taken away by ambulance, according to a story TSN.19:30.

The saleswoman Elena miraculously managed to jump aside and was not injured. “In the fridge it’s jammed. Just pulled the car to the refrigerator,” she says about the baby. Bystanders pushed the car to free the girl. The driver explained that he could not fit into the rotation. “It so happened, I’m sorry, I didn’t want that,” he said. The man admitted that he got behind the wheel drunk – drinking cider.

The car flew into the shop of food products in goloseyevsky area. At this time, the kiosk for buying products of a woman with a three year old daughter. From blow the child caught in between the refrigerator and the bumper cars. A girl with spinal cord injury and deep lacerations of the face of a visor “fast”. The driver of the car was very drunk. 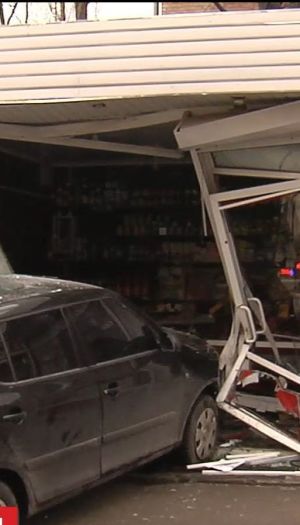 The shop owner is not as concerned about losses as the fate of an unfamiliar child. “The main thing here is not the car, not the kiosk. The child suffered, she fractured her spine, most likely. Metal kiosk doesn’t matter. Child! The man was drunk behind the wheel,” the shocked businessman Pavel Yastremsky. Relatives of a drunk driver can’t explain his behavior – say, drunk at the wheel he used didn’t sit down, and why did it now I do not know.

As previously reported, in the capital on Wednesday at 13:00 there was a horrible accident: the driver of Skoda Fabia hit a three-year old child who was standing on the street with my mother, and then flew into the kiosk. According to eyewitnesses, the car moved up the street and crashed into a parked Mercedes, after that, he threw people to the kiosk.