The exchange of hostages: dozens of militants refused to return to ORDO 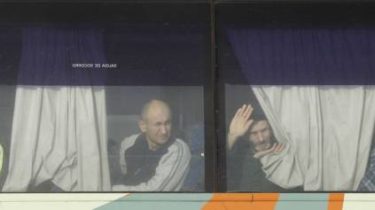 According to the results of the exchange of hostages between Ukraine and ARDLE the Ukrainian side gave the rebels 237 people instead of 306. The others refused or were released from prison.

This was stated by special representative of Ukraine for humanitarian issues Viktor Medvedchuk, reports TASS.

“40 people were released, and 29 refused to exchange. Refusals to exchange were in the last days, even now, during the exchange was. We gave (LC – ed), not 75, and 73 people, because the demarcation line of the two refused,” he said.

Recall that today, December 27, the long-awaited exchange of hostages. According to preliminary agreements, 74 citizens of Ukraine exchanged for 306 of detained terrorists and Russian military personnel. According to Irina Gerashchenko, now the invaders hold more than 160 of our fellow citizens. But for half a year of negotiations, the rebels confirmed only 97. The rest will have to look further.