The exchange of hostages ended: 74 Ukrainians back home 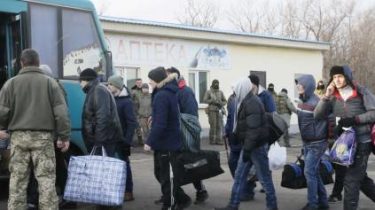 Today, December 27, 74 freed hostageswho were in captivity in the occupied part of Donbass.

They are already on the territory controlled by Ukraine, said the people’s Deputy from “Blok Petro Poroshenko” Irina Lutsenko.

The exchange of hostages of 43 have served time in prison, only two people agreed to return to Lugansk

“The good news about which we can speak. The exchange process ended. The Ukrainian side has received the 74 hostages who were in captivity in the occupied part of Donbass. They return home!” – she wrote in Facebook.

In turn, the press Secretary of the President of Ukraine Svyatoslav Tsigalko said that the buses 58 released went from Horlivka and Mayorsk.

“According to Irina Gerashchenko, a bus with 58 of our guys went from Gorlovka to the Mallorcan. This means that in 20 minutes, all 74 of our hostages will be in the controlled area”, – he wrote in Facebook.

Recall that today, December 27, the long-awaited exchange of hostages. According to preliminary agreements, 74 citizens of Ukraine exchanged for 306 of detained terrorists and Russian military personnel. According to Irina Gerashchenko, now the invaders hold more than 160 of our fellow citizens. But for half a year of negotiations, the rebels confirmed only 97. The rest will have to look further.