In Lviv, the meeting released from “LPR” hostage became a feast for the whole village 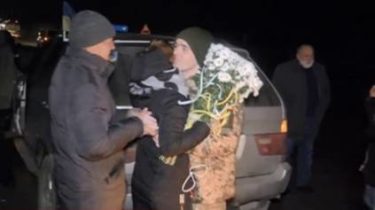 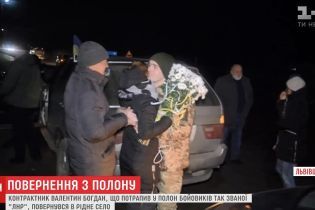 Several dozen residents Yelykhovychi village of Zolochiv district in Lviv region with Ukrainian flags met your hero Valentina Bogdan. Ukrainian soldier-the contract employee for more than a year in captivity of militants of the so-called “LNR” and was released as part of a major operation to exchange the hostages for prisoners in Ukraine, separatists and terrorists, according to a story TSN.19:30.

The people greeted countrymen with shouts of “Congratulations!” and sang the Anthem of Ukraine. Tired of the way the guy smiled, but joy gave him the moment of entrance to home. “We were held in Lugansk in jail. On the street did not go asking whether to go – said at the hospital to not walk out. Sitting constantly in the four walls only when the OSCE came across the street will hold, and everything” – said the released fighter.

Videosemki arranged a warm welcome for the young soldier Valentin Bogdan, who returned from captivity

People were shouting “congratulations” and sang the national anthem. The just-released the fighter is actually the whole day was on the road from Kiev to Zolochiv district. The guy’s tired, but smiling. Says that really wants to come home. 22-year-old soldier was captured by militants of the so-called “LNR” in the winter of 2016. 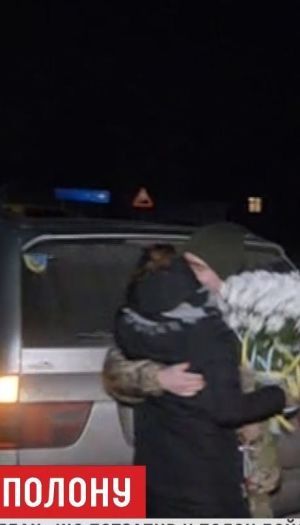 Valentin Bogdan served in the 24th mechanized brigade, in the hands of terrorists fell in the winter of 2016. His Alexander’s mother even went to the occupied territory to find him, but found none. A month ago gunmen allowed him and another six captives to phone home. Thus was announced the great exchange. “It’s hard for us to wait, we’ve time traveled to Kiev and searched around for it. Couldn’t tell us – nobody could. He said that even he can be a 200, we don’t already know where to look, what to do, but did not lose hope that they are alive,” said the sister of a soldier Marichka.

“Asked again : is This for us? Is that true?” Gerashchenko told about the meeting released Ukrainians in Donbass

As reported, soldiers released from captivity and brought to the capital, immediately delivered in the Kiev military hospital. There men have been screened and met with relatives. Fighters doctors will examine 2-3 days. If the state of health will allow Ukrainian heroes go home for the holidays. After January 9, they must return to their units.